For the Love of Film (Noir): End Credits 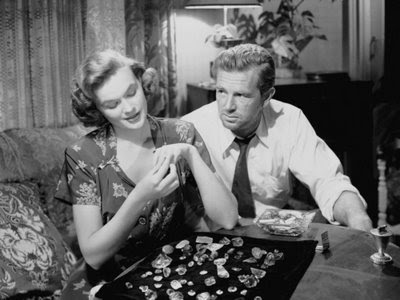 Time for the end credits to our For the Love of Film (Noir) blogathon, which event was both more epic than most movies in this genre, and has an uncharacteristically sunny coda.

The final total for donations made through the blogathon link comes to $5667, and that ain’t hay.

Here’s the Siren’s favorite stat: This year, we had 159 donors. That, my friends, is almost double the number from last year, and it includes donations from well beyond the borders of these here United States.

The Siren invites everyone--Marilyn, Greg, the bloggers who did such excellent work--to take a bow. This is just that much less the Film Noir Foundation will need to restore The Sound of Fury to its full, shadowy glory.

And the Siren points out, in pride and fellowship, that in addition to taking considerable time and trouble to write something, or even several somethings, a large majority of bloggers (not an avocation known for being lucrative) dug behind the sofa cushions and donated money, as well.

You’re a swell group. Next time someone talks about the blogosphere dragging down the discourse, you tell them, as Sterling Hayden would have, “Don’t bone me.”

And here we have the winners of the raffle prizes. Warmest congratulations to them all!

Deluxe DVD of The Prowler: Sam and Lucille Juliano

Original watercolor of Lloyd Bridges by Steve Brodner: Stephanie Chadwick
Posted by The Siren at 10:23 AM

Thanks to you and Ferdy for hosting this caper. It was great going on the lam with everybody.

As I noted on “Ferdy on Film” yesterday that you, Marilyn and Greg did a great job hosting this blogathon and the money raised is reason to celebrate. The contributions from bloggers all over the world were phenomenal. Eddie Muller’s work and the attention received from so many well known advocates like Lou Lumenick, Leonard Maltin and the rest was astounding. Look forward to next year and another restoration.