Nomadic Existence: Von Sternberg's Two Shanghais and Fritz Lang's You and Me 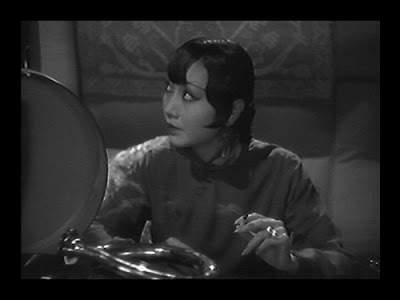 More from my Retro-Fit column at Nomad Widescreen. The Feb. 16 column, on my two favorite Josef von Sternberg movies:

Both stories share a lot more than setting — they bore into the unsavory urges a class-bound and hypocritical society tries to bury. Above all, both movies are preoccupied with duplicity — who needs to use it, and who scorns it. Marlene Dietrich, as Shanghai Lily in Shanghai Express, was once Magdalen, a good woman, or as good as the sensual Marlene could be. Now she’s a grifter working her way up and down (ahem) the China coast. The key to Shanghai Lily, however, is that she’s honest about her dishonesty; indeed she takes a certain pride in it. When she runs into Clive Brook, the stuffy doctor she still loves, he tells her, fatuously, “I wish you could tell me there had been no other men.” And Lily’s wholly unembarrassed riposte is “I wish I could, Doc, but five years is a long time.” Anna May Wong, her performance like a furnace heating the entire movie, shares that disdain for pretense: “I confess, I don’t quite know the standard of respectability that you demand in your boarding house,” she tells the old lady who’s mistaken her for a model of propriety. It’s the other train passengers — Clive Brook and his problems with trust, the French “officer,” the priest whose rhetoric doesn’t match his true nature — who cling to deception. And the good ones can band together only when they abandon deceit.

With The Shanghai Gesture, Mother Gin Sling (played by Ona Munson in the best role that ill-starred actress ever got) manipulates, all right, but her maneuvers can be seen a long way off by anyone not blinded by their own lies. Anyone who isn’t Walter Huston’s hypocritical diplomat, in other words. Nobody bands together in The Shanghai Gesture; if this crowd had been on the Titanic, they’d be the ones trying to steal the life jackets. 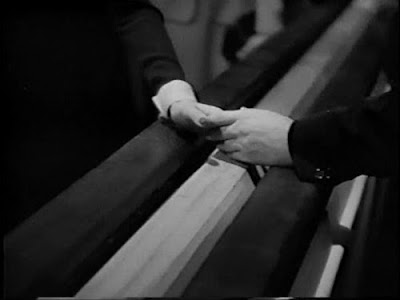 Speaking of Fritz--this week's column, in which I delight in LAHNG's You and Me:

There are many adjectives that recur in descriptions of Fritz Lang movies; charming isn’t one of them. Discovering You and Me, the oddball three-song musical comedy Lang made in 1938, is like finding out T.S. Eliot loved Groucho Marx (and he did) — where did that come from? The movie is beyond charming, it’s enchanting, one moment after another of romance and Runyonesque wit, mixed in with a dose of left-leaning social realism that goes down easy in part because it’s sung. Oh, Fritz’s preoccupations are there, all right — double lives, pitiless authority, the tyranny of material needs, the criminal underworld — but the touch is light, despite the shadowy cinematography. I have been a passionate Fritz Lang partisan since viewing M in my early teens, and it was an exhilarating experience to sit in the Film Forum when You and Me was shown as part of this year's “Fritz Lang in Hollywood” retrospective, happily muttering over and over, “He could do this, too.”

The movie opens with a musical number, “You Can’t Get Something for Nothing,” illustrated with a wonderfully abstract set of images of what you can get for something — everything from carrots to one of those terrifying 1930s permanent waves. We then move into the department store where much of the movie is set, and we see Helen (Sylvia Sidney) catching a woman shoplifting and eventually refusing to turn her in. Then comes one of the most purely sexy moments in any film of the era. Handsome sales clerk Joe Dennis (George Raft) is rebuffing the advances of a drawling mantrap of a customer, Joyce Compton, who has a memorable musical cameo in The Awful Truth. As he escorts Compton on the down escalator, we discover why he isn’t interested — here on the up escalator comes Sidney. Their hands meet as they pass, in a touch as erotic as a kiss.

As always, linking to Nomad is as dicey as robbing a department store or boarding a train for Shanghai, but for the time being, this link to von Sternberg seems to work, and you can find the Lang column here. Otherwise, heigh-ho for the thirty-day free trial. By the way, there is a lovely series of screen caps from You and Me, including that escalator, at MUBI.
Posted by The Siren at 10:01 AM

My favorite moment in The Shanghai Gesture is when Victor Mature wraps Gene Tierney in his enormous cape and looks both ways before covering her face with kisses. Getting a moment as romantic as this one out of the least romantic actor in the history of the cinema is proof enough of Sternberg's genius.

At a mixed media workshop I attended this weekend, one of the artists used a photo of Anna May Wong in a textile project. The dress she wore in the photo -- from Daughter of the Dragon -- is apparently on display in the American Woman Exhibit at the MOMA.

Fritz Lang said that YOU AND ME was done in the style of one of Brecht's small plays and Kurt Weill did the music for the film. It's one of the great adventurous films which vindicates David Ehrenstein's insistence on the 30s as being a creative peak of American cinema.

Arthur, I agree, You and Me is a great example to buttress David's thesis. It was such an unexpected delight, and it isn't even as though I walked in thinking I'd hate it--it's Freetz, after all.

It's startling to see Ona Munson in the early '30s, as there isn't anything shown in her acting to suggest she has a Mother Gin Sling in her. As much as David's noting of Mature, Sternberg's genius is also apparent in the performance he got out of Munson.

I saw You And Me many years ago, loved it, and wondered how it wasn't better known. The answer was obvious - it wasn't what viewers expect from Lang. It sure wasn't what I was expecting.

It's been a while since I saw You and Me for the first and only time. I remember liking it, while also finding it strange. And I recently watched a lot of Sternberg again, but somehow missed Gesture. Thanks for reminding me about them.