Anecdote of the Week: No Small Parts 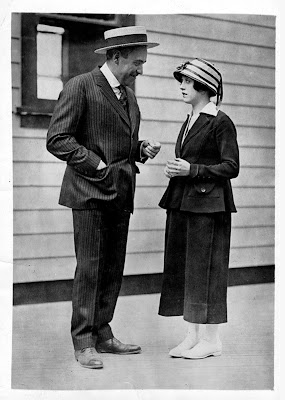 One of the Siren’s new movie books this year is King of Comedy, by Mack Sennett. The Siren doesn’t know that much about the very early days of silent film, so she can’t attest to Sennett’s reliability as a memoirist. Judging by Sennett’s style, he seems to be more of a yarn-spinner than a meticulous recorder of an important historical era in the development of the cinematic arts.

He’s funny as hell, though, so who cares.

Here is Mack Sennett, working his way up in Little Old New York, not too long after the era of The Strawberry Blonde.

I hung around the Bowery, picked up an acquaintance here and there through boardinghouse connections, and got a job. At first I was handed a broom and told to sweep out. My rise was sudden. One night they needed a gifted fellow to play the hind legs of a horse, and so I made my debut in this character part.

My vis-a-vis, you might say, was a young and handsome man named Stu Krauss from North Carolina...Stu Krauss moaned when I was made the hind legs of the horse. “I have been the front legs for two months,” he complained, “and I had hoped for promotion. Now you come along and grab the star part of the act.”

“Anybody can be the front legs,” Stu said. “The front legs is--or are--[Stu was educated] the straight part. The hind legs do all the acting and get all the applause.”

“I guess talent will come out,” I said. “I have been recognized.”

“Indeed you have,” said Stu. “The minute you appeared I said to myself, ‘Here is a man who is destined to be the rear end of a horse.’ “

Above, a picture of Mack Sennett with the love of his life, Mabel Normand, taken from a swell fan site called Looking for Mabel Normand; it has lots of pictures and abundant film clips, too.

*****
Speaking of film history, These Amazing Shadows, in which the Siren can be briefly glimpsed during a segment about The Wizard of Oz, continues to be screened around the country. The Siren’s favorite part of These Amazing Shadows consists of the details about restoration and the Library of Congress archives. Peter Nelhaus recently caught it in Denver and saw director Kurt Norton speak. Raquelle at Out of the Past saw it, also liked it, and sneaked a cellphone shot of the Siren on screen. She says she hopes I’m not mad. I’m not. I just want my readers to know that my skin is not gray in real life.

Further screenings are being held around the country, and the film is still available through video-on-demand. It will be available on DVD through PBS Video and is scheduled to screen on PBS around December 27.

Further to the Siren’s George Stevens Resurrection Drive in partnership with Raymond de Felitta, the estimable Glenn Kenny has started a Tracy-Hepburn Project in which Glenn plans to watch all of their co-starring films. And he's watching them with his better half, Claire, known to Glenn’s readers as “my lovely wife” or “MLW” for short. The first selection was Woman of the Year, and Glenn and Claire agree with the Siren that it's a neglected masterpiece and a landmark in the positive portrayal of career women on screen. Just kidding. He and Claire had pretty much the same problems with it that the Siren did. It's a witty exchange, and the Siren is looking forward to Keeper of the Flame, which is up next.

Michael Phillips, the artist formerly known as Goatdog, can be heard here discussing his horror-film series coming up in Chicago. Michael's series, Shock Theater from the Cinema Dementia Collection, will be running a double feature at the Wicker Park Arts Center in Chicago on the first Friday of each month, starting in June. There's an extensive profile of Michael, a razor-sharp man and devoted cinephile, here at the Shadows and Screams blog. 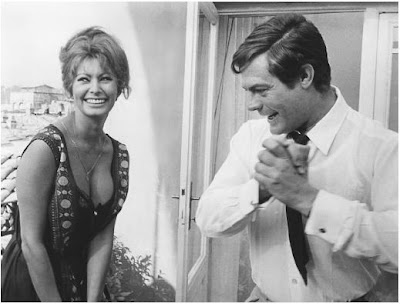 Finally, the Siren’s longtime blog pal Flickhead has an affectionate post about a new three-disc Blu-Ray set of the three films that Sophia Loren made with Vittorio de Sica. Flickhead puts them in the context of their time, discusses the ebb and flow of de Sica's reputation and most importantly, assures us that Sophia and Marcello Mastroianni look great on Blu-Ray.
Posted by The Siren at 11:17 AM

Of course Sophia and Marcello look great on Blu-Ray! Can you conceive of any medium or platform on which they would not be stunning? I sure can't.

This, however, is what I will be taking away from this post:
“The minute you appeared I said to myself, ‘Here is a man who is destined to be the rear end of a horse.’ “

That, my friend, is humor.

I so desperately want to know what became of Stu Krauss. Don't you?

Fascinating tidbit from Sennett on vaudeville hierarchy -- even including the starring section of a horse's anatomy...

I so desperately want to know what became of Stu Krauss. Don't you?

Thanks for the plug!!

Thanks for the link.

I have to consider myself fortunate that I had cinephile relatives. My introduction to the early silents was in a Detroit theater when I was eight, back in 1960. My grandmother took me to see the compilation film Chase Me, Charlie.

Your Sennett excerpt made me laugh.

Siren,
The photo you posted of Welles made me wonder if you'd read Chris Welles Feder's memoir about her father. I haven't finished it yet, but I have to say it's both fascinating and heartbreaking. The book is beautifully written. She reveres her father, and appreciates his genius, but she also makes clear that for most of his life he was much more interested in his career than his kids. If you have read it, I'd be curious to hear your take.

Uncle Gustav said...
This comment has been removed by the author.
5:14 PM

Oh David, thank you! I love the music to Mack and Mabel; I wonder if anyone ever thinks about giving it another shot?

Casey, no, I haven't read that one!

THE FUTURIST! would love to read this book you write about. HE is a great fan of silent comedy and its genius in visually making you happy.

AS to the above comment regarding MACK & MABEL, THE FUTURIST! must state he saw a production of it in Millburn NJ at the PAPERMILL PLAYHOUSE (beautiful huge place) and it starred Lee Horsley. If you recall he played TV's Matt Houston. Anywho, he was better than expected and sang in a sing song talking Robert Preston way (who orginally played Sennett it on B'way) It was most likely full of film history inaccuracy, but it was grand. Great music, especially a little number called TAP YOUR TROUBLES away, wherein the audience watched silent film actress Lottie Ames perform foot magic in spotlight to a terrific tune. At the other end of the stage, we see in spotlight Mabel's drug addiction and the murder of director William Desmond Taylor. Dark toe tapping fun.

I wonder about that too, Siren. It would be perfect for an "Encores" revival -- provided the right leads could be cast.

T_Futurist would love this book for sure; it really is hilarious in a self-deprecating way that he would identify with.

Hmm, who would we cast as Mack and Mabel? *ponders*

Yojimboen, are you making fun of the great T & D?

Never in my life!

Eeek! Because if you were making fun, I was going to say "thank you"...

Tsk!
I feel so used!

Oh don't feel that way! I recognize their status, well deserved as it is. Bolero is legendary, and T & D put a respectable face on a sport that is too often brought down by petulant divas. Still, their sense of entitlement while competing always put me off.

When they performed TAP YOUR TROUBLES AWAY did they break through the ice?

I have difficulties working up enthusiasm for what I know of MACK AND MABEL -- some stray affection for the song "Time Heals Everything," notwithstanding. I notice that Facebook has a page petitioning Bartlett Sher, whom I used to know when he was directing for the San Diego Public, to direct MACK AND MABEL. Me, I'd rather persuade him to direct the Latouche & Mioross musical THE GOLDEN APPLE (*not* to be confused with Bock & Harnick's THE APPLE TREE) -- or *anyone* to direct THE GOLDEN APPLE.

I like that John Barrowman goes into a Scots brogue when he's with his parents.

It goes without saying that The Golden Apple screams out for revival.

Can't imagine why no one has taken it up. 'Touche's lover Kenward Elmslie is still with us and could provide advice. Not to mention the great Kaye Ballard who played Helen of Troy and sang the show's big hit "Lazy Afternoon."

My best guess is that Stu Krauss is the chap helping Welles get Rita H. into or out of that box.

Thanks for the link! It's nice to be among some eminent company.