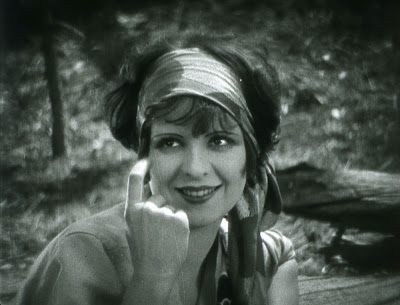 Yesterday marked the release of Treasures 5: The West, a three-DVD set of rarities from our pals at the National Film Preservation Foundation; it's marvel of care and restoration, with 40 shorts and features depicting sites all over the Western U.S. (and one in Canada). "None of the films has been available before in good-quality video. The 3 DVDs come with a book, interactive screens (some with historical maps), new music, and commentary by 23 historians, museum curators, and preservationists," writes the NFPF's Annette Melville.

And what makes Treasures 5 a solid-gold must for readers of this blog and many other film sites is that the set includes The Sergeant and The Better Man. These two one-reelers were restored with the money we--meaning you, me, Marilyn, Greg, and about 50 writers and bloggers--raised in the very first For the Love of Film blogathon. We’re credited in the wonderfully detailed book that comes in the set.

The Sergeant, from 1910, tells the story of how the title character pursues the colonel’s daughter, gets lost, gets rescued, gets demoted (offscreen) and gets her back, all in 16 minutes. The story is not the point, however; it’s essentially a travelogue through Yosemite, with jaw-dropping views of the park’s splendor. You see the forests, the mountain range, and above all the waterfalls and rapids, all so handsomely framed that the Siren would dearly love to see it projected. The director, Francis Boggs, was murdered one year after the film’s release. He directed about 200 films; The Sergeant is one of only nine surviving from him. We can be proud that our hard work and money preserved it.

The Better Man (1912, Rollin S. Sturgeon) also has great rewards, in that it up-ends the prejudiced attitudes towards Mexicans frequently shown in movies. (The notes tell the story of what those attitudes were at the time with just a couple of titles: The Greaser’s Gauntlet and Broncho Billy and the Greaser). The 12-minute Vitagraph film was filmed near the company’s headquarters in downtown Santa Monica; the Siren isn’t familiar with Santa Monica, but she strongly suspects it doesn’t much look like beachfront Wild West any more. In The Better Man, a neglectful husband and father goes out to blow his salary on a poker game while his child lies gravely ill. A Mexican horse thief who’s searching for food happens upon the wife and child, and he is persuaded to seek out a doctor. The ending packs a great deal of emotional satisfaction.

There are more details in the reviews from Dave Kehr and Lou Lumenick, both friends of the blogathon and film preservation in general. The Siren is still making her way through the set and hasn’t yet seen Womanhandled, the near-complete Gregory La Cava that was Lou’s favorite. But she watched Mantrap, from 1926, the Victor Fleming movie that made Clara Bow a star, and oh it is marvelous. Imagine the Siren’s crowing over the DP credit: “James Howe.” Yes, that James Howe. Eugene Pallette, as young and relatively svelte as he was in Chicago, plays a stocking salesman who persuades a wealthy divorce attorney (Percy Marmont) to take a trip to the backwoods. There Marmont encounters Alverna, a former manicurist who has married the lummox (Ernest Torrance) who tends the local general store, and is giving him merry hell in the bargain.

Clara Bow was an enthralling, utterly natural screen actress; even Louise Brooks, that toughest of tough articles, adored her. She takes over the movie from the instant she steps out of a man’s car and gives him the air with such cheery ease the guy may not even realize he’s history. The Siren loves Bow’s complete transparency, the way you feel as though you see her brain working every minute, even when (as here) the character has way more animal instinct than smarts. Watch her throw her arms around her husband and stuff a bonbon in the attorney’s mouth--and man, will Bow ever make your wish women still used fluffy powder puffs. She had one of the saddest lives of any major star; “her private miseries allowed easy access to her volatile emotions,” remarks the Movie Diva, in a terrific post. Mantrap was Bow’s own favorite among her movies, and this DVD of it looks great.

One last note: net proceeds from the sales of Treasures 5 go to the NFPF to further its good work. Need the Siren say more?
Posted by The Siren at 8:37 AM

Labels: Blogathons, For the Love of Film, movies in brief, Silent Movies

Lovely. Looking forward to seeing it.

Is it just my imagination or does everybody look like Lambert Wilson?

Jacqueline, thanks so much. You will love this set. It's beautifully done.

Y., ha! I loved Lambert Wilson's plays for many years before I ever saw a picture of the man.

Ahem. It seems that bad joke needed an emoticon...suffice it to say that when I clicked on the L. Wilson pic in the other thread I was all confuzzled and expecting the author of Burn This and Fifth of July...and he don't look like that.

I don't remember Lambert much at all from The Matrix but well, we all know how I felt about that one.

Aha, googling reveals he was only in the sequels, which would explain my not remembering him from the original. I am starting to feel quite irritated with Lambert through no fault of his at all.

All right everybody, enough lollygagging: The Constant Nymph is on TCM at 8 pm. My twins are still awake so I'll be watching a recorded version, but you've been reminded!

Yes'm, recorder is set. Bow really was an amazingly physical actress, she moves onscreen better than anyone alive, then or now. A brilliant comedienne. Something to look forward to, thanks for the heads-up.

Ah, yes… The Constant Nymph aka Letter from an Unknown Woman (written in crayon).

A dangerous film for adult males:
“But Your Honor, the actress was twenty-six years-old!”
“Doesn’t matter! The character she’s playing was fourteen and you’re not allowed to get hot! The law’s the law! Six months for unseemly thoughts!”

One click, Prime, it's in the mail. Thanks for the head's up!

I've been waiting a long time for a decent copy of MANTRAP on DVD. That alone would be worth the bucks. Thanks for your work on this project, Farran.

From the look on her face Carole is obviously reading Proust in that banner pic.

My copy has been shipped and I was thrilled to be a participant of the blogathon that helped fund The Better Man. A film I've now had the pleasure to see on the big screen twice. A thrill to see the credit card! I'm looking very much forward to the other treasures in the set. Each of the treasures sets is worth having in your home library, some wonderful things to be seen. Thanks again to you, Siren and Marilyn for organizing that fabulous blogathon. Any hints for the next one (in February again?) - I need to start composing now if I am going to do a better job blogging for it.

I am in the midst of watching The Constant Nymph and am simply agog at Fontaine's performance. That a 26-year-old actress could convey the coltish awkwardness of a teenager whose body has outpaced her brain...that's staggering.

I am enjoying it so much!

Having watched my crappy copy of Nymph a couple of times this year, it was terrific to see a clean print; but it wound up confirming a few things: Firstly, the film could never be made today – mature adult male and 14 year-old girl? The bluenose morons wouldn’t permit it. Secondly, Boyer seemed to sashay through the piece without the faintest notion of what he was in for, and thirdly, I can’t remember a single role she played that was worthy of Alexis Smith’s skills. This was one poor woman mightily gypped out of a career by the Brothers Warner.

My contribution to the Yojimboen Fund for Forlorn Aesthetes (or, as I like to call it, the Ale and Quail Club). The one on the left is allegedly Clara Bow (hence the much needed topical reference but I apologize for the lousy quality).

It sure looks like a chaste kiss, doesn't it?

Jonathan Rosenbaum said...
This comment has been removed by the author.
5:36 PM