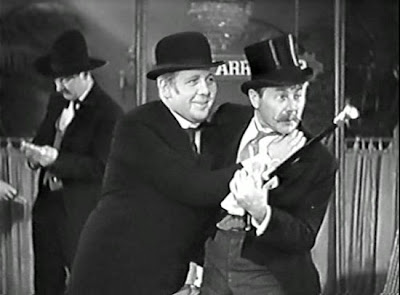 For the quite marvelous film site MUBI, home of my friend David Cairns' fabulous column The Forgotten, the Siren has written up the far-from-forgotten Ruggles of Red Gap. Because it's starting a one-week run at Manhattan's Film Forum, and because she loves it dearly. An excerpt:

The film assembles the kind of sterling character actors that we cinecrophiles grieve over on long winter evenings. McCarey, directing the legendarily difficult [Charles] Laughton, doesn't stint on the supporting players to favor his star; the film includes a lot of master shots that keep everybody in frame and in mind. Roland Young, so starchy at first that his shirts could walk off under their own power, may take the prize, as he learns the joys of egalitarianism via luscious blonde Leila Hyams. Mary Boland's Effie Floud, while clearly a climber, can still make you sympathize with what she has to cope with, such as an argument over her husband's hideous taste that ends with her calling him a "striped bass." And Charles Ruggles has some of his best moments gussied up in a morning coat and trying to get his valet drunk: "Come on over here, I want ya to meet somebody," he bellows down a Paris sidewalk, oblivious to snooty French stares and the fact that his own servant is trying to pretend he doesn't know him.

Ah yes, that Laughton drunk scene. Here's a foolproof way to judge an actor's fundamental competence: If he emphasizes the drunkenness, he's hopeless. A person who's truly lit, no matter whether the scene is tragic or comic, is fighting his state every step of the way. Laughton, of course, was far more than competent, and what makes his drunk act paralyzingly funny is that Ruggles isn't even admitting to himself that he's plastered. As he refuses to precede Floud into a carriage, Ruggles has the same old ramrod stance—but the face shows a hint of toddler-like glee, perhaps some inner mockery he could never show when sober. Yet the valet still tries to bring some dignity to each stage of the binge, finally posing on a carousel horse like an overdressed Cupid.

Read the whole thing here.
Posted by The Siren at 8:12 AM

Man, do I love Roland Young.

So, Siren, are you going to see it at Film Forum? Wanna put together a group?

This is a truly wonderful essay on of the most wonderful of films. Your conclusion, and the film itself, always make me think of Emerson, and specifically Stanley Cavell’s Emerson, his focus trained on the “unattained but attainable self.”

Quite applicable seems this passage from Cavell’s essay “An Emerson Mood”:
“As if sinking roots is not a matter of finding out where you want to live but finding out what wants to live in you. As if your roots – that is, your origins – are matters not of the past but precisely of the present, always, fatally. As if America could banish history, could make of the condition of immigrancy not something to escape from but something to aspire to, as to the native human condition.”

Always enjoy watching Charles Laughton, and enjoyed him in this. You're right about the drunk scene. He's definitely holding back, which makes it funnier. I've noticed Laughton's weight fluctuates quite a bit throughoutthe 1930s. In this, and in The Tuttles of Tahiti, he's as thin as I've ever seen him. Yet I believe he played Henry the VIII (the first time) in between those two movies, and looked much more hefty, though not as hefty as he did in the 1950s.

That Ruggles didn't play Ruggles strikes me as a bit ironic.

For those of us not fortunate enough to live within subway distance of the Film Forum (and via the miracle of the internets):

My favourite sequence has always been Laughton/Ruggles reciting the Gettysburg address. It begins on the above link at 58:30 and continues until the saloon keeper’s perfect punchline.

It helps to be a Brit – a stranger in your strange land – to get the last full measure of McCarey’s skill. He stays off Laughton’s face till the last sentence. Jee-zuz, it takes my breath away every time!

So wonderful to see such a generous appreciation of RUGGLES OF RED GAP, which is my favorite movie. I love it darn near beyond reason.

Dearheart FNS - Obviously I posted my above comment before reading your complete piece.

Dolt that I am, you said it a lot better than I ever could.

All I have left to contribute to this thread is the magic moment when J. Carson as Carnak the Magnificent (the writer as ever, the incomparable Pat McCormick) put the envelope to his turbaned head and intoned the answer, “Zasu Pitts”; then tore open the envelope and read the question, “What do you get from Zasu Prunes?”

Never forget that Zasu PItts was in "Greed" too. She was quite a fine dramatic as well as comedic actress though she lives on as a punchline.

Gmoke, Zasu Pitts is wonderful. The other day I had a sudden bizarre craving to see Mrs. Wiggs of the Cabbage Patch. It has dropped off the face of the earth except for this bit at Youtube, wherein Zasu absolutely refuses to let W.C. Fields walk off with the scene and holds her own, and then some. She was wonderful in Greed, too. In talkies she was resolutely typecast and that's a bit of a pity, but damn she was good.

Does my heart good to see such love for Ruggles. Yojimboen, it's not your fault, I kinda buried the link without meaning to. Ordinarily I never post two things on the same day--the split-screen thing is as hard to pull off on blogs as in the movies--but the exigencies of other people's posting skeds meant it just worked out that way.

I should add that for those of us with region-free players, the wonderful British company Masters of Cinema is bringing out Ruggles on DVD, without the French subtitles that decorate mine. I have to admit, though, that the French gave me some additional giggles, especially when they're translating Floud.

Why thank you Happy Miser! Can Mrs Wiggs be far behind? Strange little movie that I love beyond its merits...

This movie just tickles me no end. I like the scene at the saloon when they're all trying to think of a name for Ruggles' new restaurant. "Well, I still think it should be called a horse's something." Has anybody read the book?

Charlie Ruggles as the voice of Aesop on "Rocky and Bullwinkle"; Edward Everett Horton as the narrator of "Fractured Fairy Tales" on the same; Zasu PItts on "The Gale Storm Show." These performers all had deservedly long lives in the entertainment business.

It was always her fate to be a punchline with that name but, damn, the woman was good at what she did.