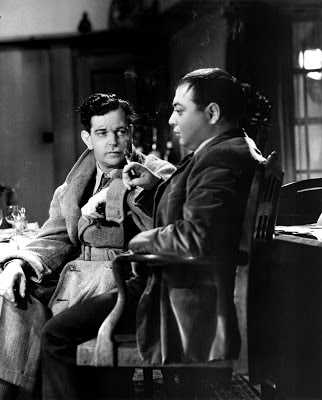 The Siren is pleased to announce that the Criterion Collection edition of Alfred Hitchcock's 1934 The Man Who Knew Too Much has hit the street, and her essay on this marvelously compact tinker-toy of a film is up at their website. This Man has been languishing in murky public-domain editions that completely failed to do it justice; Criterion has made it sparkle again, the better to find new admirers. The Siren was tickled to death to be name-checked by the celebrated J. Hoberman in his review, but even more so was she pleased to find out that Hoberman, like her, prefers the original to the remake.

Here, a brief excerpt from the Criterion essay:

Hitchcock had seen M and at first wanted Lorre to play the gang’s hit man. So in the spring of 1934, he cabled Paris, where Lorre and his longtime love Celia Lovsky were living in glum poverty. Back in Berlin, Lorre’s successful stage career had included notable roles for Bertolt Brecht, and the thunderbolt of M, released in 1931, gave the actor the greatest hit of his career. But less than two years later, as soon as Hitler became chancellor, Joseph Goebbels began putting restrictions on Jews in the film industry. By July of 1933, they had been banned from films altogether. Lorre, a Hungarian-born Jew, got out of Berlin early that year.

With Lovsky, he moved first to Vienna, then to Czechoslovakia, then finally to Paris, where even his excellent French couldn’t get him much more than small parts. At age thirty, his struggle with morphine addiction was already more than seven years old and had necessitated a recent and expensive “rest cure,” which ate up what little Lorre had earned so far in France. According to Stephen D. Youngkin’s biography The Lost One, when Lorre left for London to take up the first good movie role he’d been offered in many months, the actor had to borrow the cost of a ticket from his brother. 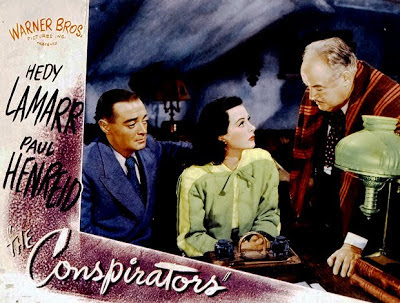 The Siren used The Lost One: A Life of Peter Lorre by Stephen D. Youngkin as a reference, and she reiterates her enthusiastic recommendation. It's a wonderfully complete resource on the actor's life and work. Since we were just discussing one of the films that Peter Lorre made with Sydney Greenstreet, from Youngkin's book here's a glimpse of this perfect team at work--sort of.

In their game of cat and mouse, Lorre did the stalking. When Greenstreet warned him he would cut off both his hands if he did not stop projecting himself into his scene, Lorre amiably checked, "Fine, then I'll play the scene with stumps and steal the whole show." Irving Yergin said thatt Lorre loved to tell of being on the set of The Conspirators (1944) with Sydney Greenstreet and Hedy Lamarr, who was wearing a low-cut dress. "Hey Sydney," he joked, "you're the only person on the set with a pair of tits." According to Lorre, production was held up for two hours while Greenstreet and Lamarr chased him around the set, no doubt fitting one reviewer's description of the actors as a "Pekingese and a great dane out for a romp." Lorre wrapped his take on one of his favorite stories with Jack Warner fining him ten thousand dollars for the day.

Thanks for this, Siren. Love the original too (although the remake does have a certain dark insight into the dysfunctional marriage of its hero and heroine).

BTW, does "The Loved One" say much about Lorre during the McCarthy era? He mostly disappeared from American screens (and America) in the 50s; always wondered if he'd already been greylisted, or decided to lie low in Europe until the craziness passed.

Looking forward to this!

Stephen, oh yes it does. It's a complicated tale but he barely missed being summoned by HUAC, and as I recall Youngkin doesn't offer a real reason why he wasn't, beyond Lorre's lack of desire to broadcast his politics and the luck of the draw. Lorre did small things, like the hotel in NH that blithely told him they were "restricted", not realizing Lorre himself was Jewish. He spilled the inkwell on the register and left, then sent the hotel a 3-year subscription to the Forward. The FBI knocked on his door with a list of names and Lorre responded, "If you want to know who I know, you better have more names." Lorre also claimed to have been the one to tell Brecht to get out of Dodge. When things really heated up, as you say, he left for Europe where he stayed until things cooled down.

I have mixed feelings about the 1934 version, but Lorre is fantastic in it. He's also very entertaining in Hitchcock's Secret Agent, which I think is a fascinating film. Lorre was a marvelous actor. It's too bad that he didn't do more films that were worthy of him.

Hoberman's description of Lorre as The Checkered Demon is so apt it's scary.

Watched "The Boogie Man Wiil Get You" (a bargain-basement ripoff of "Arsenic and Old Lace") on TCM the other day, and Lorre shines, as always, and Karloff's presence makes one rue his absence in the better film. (Just as one misses Bob Hope in the Grant role.)

He died in poverty at a relatively young age. So, maybe his judgment and sense of humor weren't so great.

Oh my god, this is awesome.

Thank you, Siren. I'm embarrassed to say I haven't seen the 1934 version. I loved the "pair of tits" story.

Thanks, Siren. I knew of the Brecht connection of course, but in everything I've read on those ugly days -- and I've read a lot -- I never came across much on him, and I always wondered why. (He's exactly the sort, with his drug problems, that the Feds would have loved sweating.)Glad to know that, unlike Ugarte, he managed to slip away.

Casey, my philosophy is that Lorre is always worthy even when the films aren't; he's that good. I think Man is better than Secret Agent but it's probably time to revisit the later film.

Dave, a bargain-basement version of Arsenic and Old Lace is a scary thought. Barely even heard of that one but it sounds like a nice diversion for a rainy afternoon on the couch; not that I get enough of those.

Trish, the old versions of Man that were circulating were so dire-looking for the most part that waiting for this restoration might not have been such a bad idea. And it's such a swift, tidy, 75 minutes, it can be watched in hardly more time than a Downton Abbey episode. Not that they have anything in common.

Stephen, his experience watching the rise of Hitler made him a wary sort, as you can imagine.

Wonderful essay, oh Siren, witty and cogent - Lorre has been a favorite since I was too young to know his name, but his face was indelibly in my mind's eye. I always like the fact that when he was making 'M', he was also in a stage comedy, jumping back and forth between them.

Still trying to wrap my head around our Siren and the Checkered Demon in the same paragraph!

Never heard of the Checkered Demon before that review. He looks...interesting. For sure.

Lorre is sneakily remarkable in Jerry Lewis' The Patsy (1964) - one of Jerry's very best.

Lovely anecdotes, Siren. I do like both versions, but Lorre's is definitely the more charismatic villain.

I read somewhere once--actually in a comment section of another blog--that Lorre couldn't speak English when he did THE MAN WHO KNEW TOO MUCH, and that he just phonetically memorized the script, without having a clue to what he was actually saying. Sounds a bit farfetched to me. Any truth to that story?

Poor Lorre, he lost his way so desperately and I don't really get why.

I just saw Lorre in the Black Cat segment of "Tales of Terror," filmed just a couple of years before his death, and he's hilarious. I think he even makes the Mr. Moto movies fun. (I've always wanted to see the last one, 'Mr. Moto Takes a Vacation,' with an audience to see the reaction to the line "You think a little﻿ Japanese dick's gonna scare me?")

Hey, Siren, thanks for the mention of my friend Stephen Youngkin's book The Lost One: A Life of Peter Lorre and the link to our website!

Kirk, to answer your question -- although Peter Lorre did not speak English when he first met Hitchcock, he did get an English tutor when he was hired for the role. Not only did he learn English, he also translated all of his dialog into German so that he could understand what he was saying. Peter did not simply memorize the lines phonetically, nor did he parrot the dialog. By the time he left for the U.S. with a contract with Columbia Studios, he had more than a working knowledge of the language.

I'm reading the Youngkin book at the moment and really enjoying it. A good piece about it and Lorre at the LRB: http://www.lrb.co.uk/v28/n06/bee-wilson/the-eerie-one

Lorre's entrance in 'Secret Agent' is one of the wildest I can think of. He may not quite chew the scenery, but he's certainly tearing off wallpaper - wonderfully unexpected second-reel business that cuts through the murkiest of public domain prints. For all his more vaunted gifts, much of the fun of watching Lorre is simply in seeing what tricks he will deploy in order to upstage everyone else.

Glad you're enjoying The Lost One, Pete! In addition to the review you mentioned, there are many more excellent reviews of the book on the Lost One website -- http://www.peterlorrebook.com. Check out the "Critics Are Saying" section. Most people reviewing the book actually reviewed Peter Lorre . . . .