The SLIFR Poll: It's Not a Comeback, It's a Return 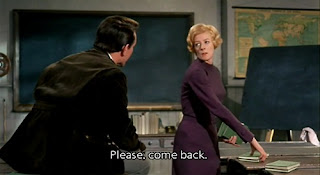 The Siren, as you may have guessed, is having a hard time trying to write about anything in depth at the moment. But here comes Dennis Cozzalio, our old friend from Sergio Leone and the Infield Fly Rule, with another quiz: MISS JEAN BRODIE’S MODESTLY MAGNIFICENT, MATRIARCHALLY MANIPULATIVE SPRINGTIME-FOR-MUSSOLINI MOVIE QUIZ. This one had a lot of noir and pre-Code questions that were irresistible to the Siren, not to mention the title reference to something that's ONLY one of the Siren's favorite films of all time. (Dennis, you rogue, was that deliberate? A Brodie-signal, like a bat-signal only 100 times better?)

So here we are. Time for some fun! As usual, to avoid one of her spells, the Siren went with the first answer that popped into her fevered brain. If you want to take the quiz, drop by SLIFR and have at it. And the Siren doffs her cloche to friend Tony Dayoub, who reminded her of the quiz by posting his own answers at Cinema Viewfinder.
1) The classic movie moment everyone loves except me is:
The diner scene in Five Easy Pieces. Perhaps the Siren's retail days gave her too much experience with too many boors. Oh, you're picking on an overworked, underpaid, middle-aged waitress. Vive la révolution! 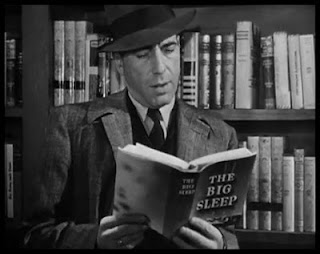 2) Favorite line of dialogue from a film noir
"I don't mind if you don't like my manners. I don't like them myself. They're pretty bad. I grieve over them on long winter evenings."

3) Second favorite Hal Ashby film
Harold and Maude. (The Siren's favorite is Shampoo, one of the best movies of the 70s; she's naming it even though Warren Beatty evidently had a great deal to do with the finished film.) 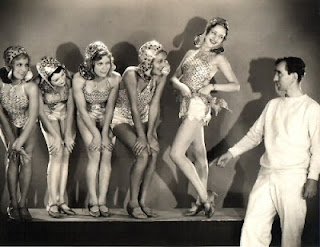 4) Describe the moment when you first realized movies were directed as opposed to simply pieced together anonymously.
As she's said before, the Siren's father and his regard for John Ford had her realizing this early on; also, the fact that the name "Busby Berkeley" meant big wonderful chorus numbers.

7) Most egregious gap in your viewing of films made in the past 10 years
The Lord of the Rings, I suppose. 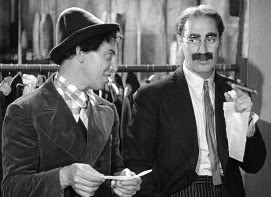 8) Favorite line of dialogue from a comedy
"You can't fool me. There ain't no Sanity Clause."

10) Richard Burton or Roger Livesey?
The most painful answer in the bunch, because the Siren has been immersed in Burton's diaries, and they are nonstop joy, fascination and delight. But the Siren cannot live without I Know Where I'm Going!. Livesey.

11) Is there a movie you staunchly refuse to consider seeing? If so, why?
Lots, but first thought is A Serbian Film. (The Siren strongly advises her gentlest readers not even to Google that one if they don't know it.) Because why would I? The people who boast about how they can sit through anything, do they believe someone greets you at the Pearly Gates to say "Dude, you made it through Cannibal Holocaust! Here's your door prize!" The Siren considers hard-core images of degradation and sadism to be brain pollution. Not to mention a colossal waste of her precious time on earth, considering she just looked at Lloyd Bacon's filmography and realized she's got dozens left. 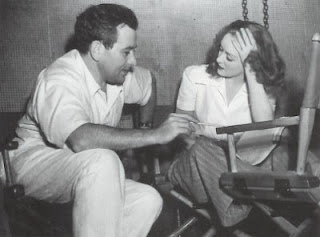 13) Most recently viewed movie on DVD/Blu-ray/theatrical?
Blu-Ray: The Navigator. Theatrical (not for work): Picture Snatcher.

14) Favorite line of dialogue from a horror movie
"I never drink...wine."

15) Second favorite Oliver Stone film
Born on the Fourth of July. (No. 1: Platoon.)

16) Eva Mendes or Raquel Welch?
Haven't seen Ms Mendes in much, but the Siren suspects she'd pick Welch in any case.

18) Best Internet movie argument? (question contributed by Tom Block)
The Sight and Sound list was good for some fun and games. 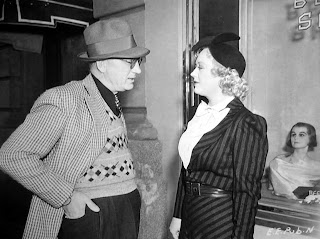 19) Most pointless Internet movie argument? (question contributed by Tom Block)
Anything in which the words "Lena Dunham" appear. The Siren signed off forever when someone on Twitter chimed in with, "Jean Renoir had a famous artist parent too." Good grief, enough already. Let's talk about Lloyd Bacon!

21) Favorite line of dialogue from a western
"Plantin' and readin', plantin' and readin'. Fill a man full o' lead, stick him in the ground an' then read words on him. Why, when you've killed a man, why try to read the Lord in as a partner on the job?" 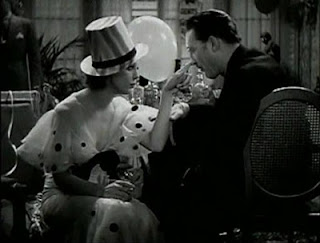 23) Relatively unknown film or filmmaker you’d most eagerly proselytize for
The Siren is passing on this one only because hell, that's her whole blog, right there.

25) Is there such a thing as a perfect movie?
Intellectually, no. Emotionally, sure there is.

26) Favorite movie location you’ve most recently had the occasion to actually visit
A few blocks from the Siren's front door, where they were filming The Amazing Spider-Man 2. Oh joy.

27) Second favorite Delmer Daves film
Probably Susan Slade. (Favorite is A Summer Place, although a whimsical argument could be made that Max Steiner is the auteur there.)

28) Name the one DVD commentary you wish you could hear that, for whatever reason, doesn't actually exist
Billy Wilder on any of his greats.

30) Name a filmmaker who never really lived up to the potential suggested by their early acclaim or success
Isn't it a shame that Howard Hawks never managed to top Scarface? KIDDING. The Siren points to her sidebar to reiterate that one good movie, for her, is enough. But because she re-watched Force of Evil recently, the Siren will name Abraham Polonsky as a filmmaker thwarted by the tenor of his times. 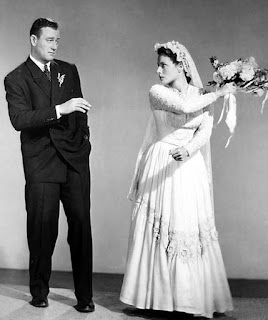 31) Is there a movie-based disagreement serious enough that it might cause you to reevaluate the basis of a romantic relationship or a friendship?
Whenever she's asked this question, the Siren likes to point out that she married a man who dislikes John Ford. Her dissent-tolerance is pretty well established.
Posted by The Siren at 11:50 AM 34 comments: 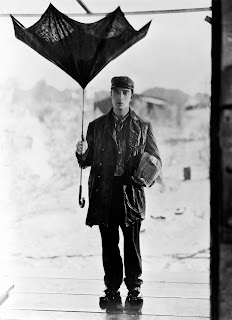 From an interview with Buster Keaton in Sight and Sound, Winter 1965/66:

My original situation in [Steamboat Bill, Jr.] was a flood. But my so-called producer on that film was Joe Schenck...Schenck was supposed to be my producer but he never knew when or what I was shooting. He just turned me loose.

Well, the publicity man on Steamboat Bill goes to Schenck and he says: 'He can't do a flood sequence because we have floods every year and too many people are lost. It's too painful to get laughs with.' So Schenck told me, 'You can't do a flood.' I said, 'That's funny, since it seems to me that Chaplin during World War One made a picture called Shoulder Arms, which was the biggest money-maker he'd made at that time. You can't get a bigger disaster than that, and yet he made his biggest laughing picture out of it.' He said, 'Oh, that's different.' I don't know why it was different. I asked if it was all right to make it a cyclone, and he agreed that was better. Now he didn't know it, but there are four times more people killed in the United States by hurricanes and cyclones than by floods. But it was all right as long as he didn't find that out, and so I went ahead with my technical man and did the cyclone.'