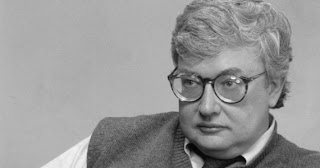 As certain critics age, they seem to drag around years of bad movies like ankle chains. They remind me of Gothic heros, betrayed lovers convinced virtue never existed at all. Once long ago these critics were hurt by a movie, oh yes, many movies, and now they say to each sweet young prospect, "You cannot deceive me! I know what you are!"

Roger Ebert wrote some of the most bitingly funny pans of all time, but he never went that route. He was writing raves right up to the end. Each movie held the possibility of love. He was a true romantic.

Here's how I recall an old "Tonight Show" with Jay Leno where Ebert appeared with Gene Siskel. Like many other people, I grew up with those two bickering in the balcony. Leno had the bright idea of putting soundproof headphones on one critic, so the other could tell the audience what he really thought of his partner. Ebert went first with the headphones. He put them on, paused a second, and with a grin of delight said, "Mozart!" And his hand started beating out a little conducting session.

Leno asked Siskel, so what do you really think of this guy? And Siskel replied calmly, "First of all, I'm a much better critic than he is." The audience roared. Leno cracked up. Even with headphones on, it should have been obvious to Ebert that something was up.

Except he was still conducting. I'm not even sure he turned his head. He was listening to Mozart. Art mattered to him.

Many film writers owe a debt to Ebert. Mine comes from what must have been a 1983 "At the Movies" broadcast. He and Siskel were doing a rundown on the Academy Awards, one of those "If We Picked the Winners" shows.

I don't remember Siskel's choice (although it might have been E.T.). But Ebert chose Tootsie. "It's an almost perfect comedy," he said. Gandhi was going to win, he predicted, "but which movie do you think you'll still want to see in 20 years?"

In roundabout fashion, Roger Ebert had introduced me to the notion of white elephant art, years before I ever heard the name Manny Farber. He'd also planted the idea that if you had a blast watching a movie, that alone meant it was worth some serious thought.

Rest in peace, Mr. Ebert. You were right about many things.

He was an excellent writer. His memoir "Life Itself" is great, full of insight about life as well as films. I highly recommend it.

4The real reason Gandhi won, came I think from P Kael: Gandhi the man represented everything Academy voters were not; lean, tan and moral.

Ebert's review of "Stormy Monday" is my all-time favorite by anyone. And it's a damned fine piece of writing. Kim Morgan has a wonderful adaptation of it as a film essay:
http://sunsetgun.typepad.com/sunsetgun/2013/04/i-wi.html

Ebert's words were so good, they belonged on film.

He was an exceptionally nice man. That counts for a lot these days IMO.

Phillip, I should read that memoir. I hear it's lovely.

Vanwall, Kim's voice is so well suited to that. Ebert did a lot of great work promoting the American film canon.

David, it certainly does. Ebert did such an admirable job reaching out to young critics and giving them a boost. I also should have mentioned his support for the blogathon in its infancy, which helped immeasurably.

Over the last few years, I've been reading his blog and some of the writing there has been magnificent. He was like a kid in a candy store with eyes full of wonder all the way up to the end. Didn't matter if it was movies, books, art, music, or people in the street, Ebert took it all in like a banquet, repaying those gifts with words of gratitude and nudges of criticism.

He was a humanizing public presence and will be sorely missed.

Roger was amazing- and so infectious with his blog and Twitter in engaging anyone and everyone. The fact that he would pen longer pieces that were musing about various things, but the writing was so accessible and thoughtful- just a wonderful person. I miss him with Siskel as well. Gene I felt was a little bit more prickly, but I think the two of them were amazing together, and I do think they were equals contemporaneously- though Roger had so many more years to grow and shine.

I do have to see that I have seen +Gandhi+ several times since 1983, when I first saw it, and it still holds up very well. As for +Tootsie+ I don't think it's quite as good as +Victor/Victoria+ nor is it as good as +The Verdict+ or +Missing.+ (By contrast, I really haven't seen +E.T.+ since 1982.) One reason +Gandhi+ doesn't get as much respect as other films is that Richard Attenborough is a rather underwhelming director, and criticism concentrates on directors first and foremost. (Though +Gandhi+ does show on theyshootpictures.com top 1000 movies.) But it's unfair to say that Attenborough simply piggie backs on his subject matter. The Amritsar Massacre, the salt march, the communal riots and Gandhi's murder are all great cinema, the emotional effect is genuine, and not to be smugly dismissed. (Certainly not by Christopher Hitchens, whose review of a book by Gandhi in the last year of his life exemplified the difference between moral courage and moral narcissism.) Kingsley gives a great, not simply good, performance. The contrast with +Sophie's Choice,+ incidentally Ebert's choice for #1 movie that year, is instructive. John Wayne turned his counterfeit courage into permanent idolhood. Why shouldn't Kingsley and Paul Scofield be respected for portraying the real thing?

I agree. Ebert's love of film and his ability to appreciate ALL Kinds of film was one of his greatest strengths.

On TV, I always preferred Siskel. Roger, was always a little too eager to a give a mediocre Hollywood the "Thumbs up". Given that Gene sounded such more elitist on TV, I was surprised how much better written Roger's film columns were.

I agree, Ebert was the better writer but back when I was watching the show I gravitated a bit more to Siskel myself. The many attempts to recharge the format after Siskel's death only showed that their TV partnership had some kind of magic that went beyond the affection people built up for the duo over the years.

Skimpole, Gandhi's not a terrible movie and Kingsley was genuinely impressive; I was exaggerating for comic effect. But Attenborough as a director doesn't do it for me. (It's a lot easier to come up with memorable RA performances; even Richard Burton, grumpy about so many actors, praises "Dickie" in Brighton Rock.) I have much better memories of A Bridge Too Far, frankly, and there's a movie I feel like NOBODY likes except me. I went over to Wikipedia just now and saw that his cameo in that one is credited as "lunatic wearing glasses" which pleases me no end.

Gandhi always struck me as one of those spinach movies. It was good for you, dammit, and you'd better eat it and like it.

Its kinda like Movie (fill in the blank). If you didn't like it or go see it, well y'know you must be one of *those*. One reason I love Kael is she wrote a honest review of "Shoah" and almost got crucified. God save us from well meaning films we're all supposed to like.

rcocean said...
This comment has been removed by the author.
10:55 PM

Or, rcocean, as Gilbert Adair pithily put it: it's not enough for the director's heart to be in the right place; his camera has to be too. And Attenborough's camera makes Kevin Smith's look virtuoso.

Thank you so much, Siren. You are spot on about Mr. Ebert and describe perfectly what I loved about him particularly as well as his byplay with Siskel. He was right about Tootsie and so many other wonderful or not so wonderful films. I just stumbled on this blog from Facebook via http://www.facebook.com/pages/Decaying-Hollywood-Mansions/111378268883521 but I love it and will certainly be back regularly.

I said in a comment section of another blog, that Ebert's TV fame was so great, that I was almost forgot he was a writer in the first place (Yes, I know he wrote his on-air reviews. I did say "almost". I rediscovered his writing only in the last few years, when I stumbled upon his blog through, of all things, Twitter.

I didn't always agree with Ebert's opinion of a certain movie. But I did enjoy watching him review movies with Gene Siskel and later, Richard Roper.