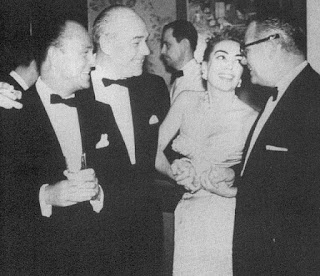 "The happiest marriage I've seen in Hollywood is Billy Haines and Jimmy Shields." 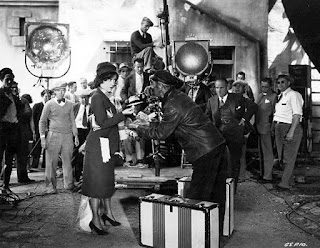 June is Allan Dwan month here in New York, and it's been a long time coming. That's him up there, on the set of What a Widow!, wearing a suit and standing next to the reflector--somewhat in the background, as he's been for too long.

The great director--"The Last Pioneer," as Peter Bogdanovich's book put it--has been dead since 1981. In the years since, he's occupied a somewhat thankless position among celebrated filmmakers. Dwan is a name recognized by most cinephiles worth their salt, but the movies he made don't have the kind of household currency enjoyed by Ford, Hawks, or any number of his contemporaries.

Brooklyn-based filmmaker Gina Telaroli and film writer and editor David Phelps are here now with their project, Allan Dwan: A Dossier, a huge labor of love. It's a massive 460-page e-book (either downloadable or readable online, take your pick) that, as Gina explains in her announcement at MUBI, "contains work in 5 languages, by 39 writers, and features 41 new pieces, along with five that we're republishing thanks to some very generous authors." It is being published in collaboration with the splendid folks at LUMIÈRE﻿.

This is the original-language version of the dossier; a full English translation will be available in a few weeks. It is available absolutely free to anyone who clicks; that is, you see, the entire idea. 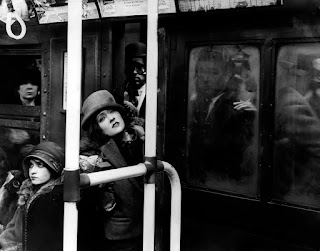 The Siren also has a recommendation for the MOMA series: the film she wrote up for the dossier, Manhandled. She picked that one to write about because she'd always wanted to see it, and it's marvelous. But the Siren is breathing some rarefied air with the company she's keeping via this dossier, an incredible array of film writers including Chris Fujiwara, R. Emmett Sweeney, Michael Lieberman, Zach Campbell, Serge Bozon, C. Mason Wells, Daniel Kasman and Dave Kehr; you should most definitely read everything that's been posted in English, and move on to the translations when they're online.

What follows is an excerpt from the Siren's essay, where she discusses the opening of Manhandled, which finds the shopgirl heroine Tessie enduring a subway ride as awful as any in film history. Tessie was played by the immortal Gloria Swanson. She often said Dwan was her favorite director,  and she unhesitatingly described him as a genius.

You can read the essay in full on page 111 of the dossier. At the end of the Siren's write-up, you will find a sad, but important coda about this movie; wouldn't you just know it, the Siren inadvertently chose a film that came with its own film-preservation mystery. As the years rush on, the fight to preserve artists like Dwan only gets harder, and more important.

Swaying with them against her will, Tessie does the dance of the New Yorker trying to avoid too much body contact, no matter how cramped the quarters. She drops her purse, and the men who are bookending her stoop to help her retrieve its contents. But when they reach back up for the straps, she's still got her arms looped through theirs, and for a moment she's suspended in air. Once she's back on her feet and smacking away at her gum, the movement of the car and the crowd dislodges Tessie's impossible hat, an overlarge squashy cloche adorned with what look like marbles—although they're probably supposed to be grapes—swinging from one side like the tassel on a fez. The hat falls to the ground, she does a deep-knee bend to retrieve it, and when she finally comes back up, the hat has lost its grapes.

And, for one marvelously subtle half-minute, the mood shifts. Tessie's face crumples as she looks at that hat, bereft of its ridiculous ornament. It’s clear, instantly, that the fruit was her favorite part, probably the reason she bought it, just as surely as Swanson’s expression shows that she can't afford to replace it.

Then her face regains its old hardness, she pulls the denuded hat back over her hopelessly mussed bob, and the hellish ride continues, complete with a masher all but licking his lips at her from his seat. When she tries to get off at her station, Dwan switches to an overhead shot. Perched in the rafters, poor Tessie tries to disembark and gets pushed back into the car, over and over. She can't manage to leave walking upright; she eventually has to bend over and scurry under a railing. Small as Tessie is, the subway—meaning of course New York itself—has all but brought her to her knees.