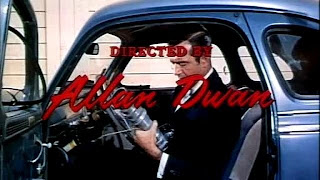 The Museum of Modern Art's Allan Dwan series is over, and the Siren managed to see nine films there over the course of little more than a month (and one film on DVD, which she'll explain). Ever since, she's been trying to clear space and time to write about it. The Siren finally decided it was best to do it simply. Those wanting a deep, director-focused look at Dwan, including cogent arguments for his status in film history, should go to the Allan Dwan Dossier so lovingly compiled by Gina Telaroli and David Phelps. Here, the Siren is going to tell you a few things that she noticed, and mostly loved, about Allan Dwan. These are the first four; she'll write up the others later, time and other obsessions permitting as always. 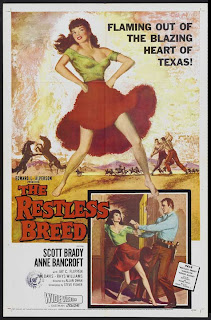 The one and only lemon. It was shot in Technicolor but MOMA screened a black-and-white print, which was evidently what they could get. (Sweethearts on Parade, which Dave Kehr wrote up for the dossier and the Siren didn't see, had the same fate.) There are some well-composed scenes of riders against landscapes, which would probably look even better in Technicolor; and young Anne Bancroft looked great. But it was a strange, strange movie, with a peeping-Tom motif of Scott Marlowe (whom Dwan described as "a very hammy young guy") peering in windows and eavesdropping and putting his eye up to knotholes. These scenes start to feel like half the running time and became indescribably creepy and wearisome to the Siren. Also, there is a reverend character, played by Rhys Williams, who seems upstanding, except that more than once, he's shown with sweat beading his brow as he stares at a ludicrous portrait of a flamenco-dancing Bancroft. (Said flamenco-pin-up is on the poster above, with the blazing heart of Texas flaming right out of it. I rest my case.) In Dwan's must-read interview with Peter Bogdanovich in Who the Devil Made It, Dwan said the girly shots were inserted by the producer over Dwan's loud protests. This was a relief to know, since having the reverend stare at a woman who's got her skirt hiked up to the Oklahoma border and is leaning back in a way that's about to provide an encyclopedia illustration of "roundheel" does rather undermine his other designated script function as the moral center of the movie. 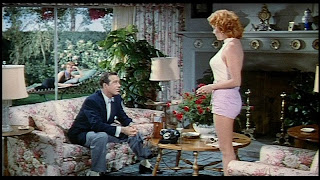 Slightly Scarlet (1956)
The Siren was shut out of this screening and was so mad about it that she went home and ordered the DVD forthwith. As it happened, while she liked it was far from the Siren's favorite in the series, mostly due to John Payne's John Payne-ness. He doesn't ruin the film, but he doesn't have that certain oomph a noir (anti)hero needs, that sense of some dirt under the fingernails or an empty bottle of rye under the bed. Lawrence Tierney, Charles McGraw, Richard Conti, take your pick--hell, even Cornel Wilde could have snapped Payne like a piece of dental floss. Rhonda Fleming, on the other hand, had earthy good-egg qualities Dwan understood and exploited well. Like the late Jane Russell, nature gave Fleming bombshell looks so outrageous they somehow bypass "I'm trouble" and wind up as "everyone's pin-up pal." Arlene Dahl was pleasingly tacky in a performance that nicely blurs the distinction between dumb and crazy. The colors, via John Alton, were marvelous, barely on the right side of kitschy, exactly right for a milieu with plenty of dough and no taste. The living room in the bad guy's lodge is so vast it's like watching shootouts staged in a hockey rink (that's a good thing). A lot of Dwan's sets are improbably large, with a big clearing in the middle; it gives his action scenes plenty of room to breathe. 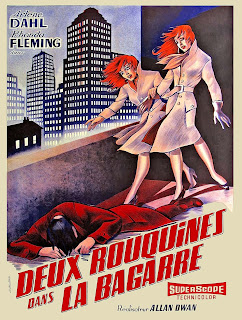 Bonus: The French title ("Two Redheads in a Fight"). Also, indulging the Siren's passion for movie posters that do not resemble the film in any way. 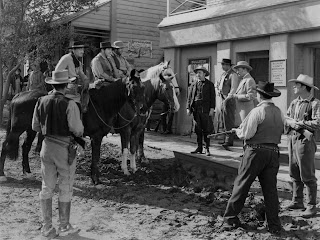 Trail of the Vigilantes (1940)
Franchot Tone in a Western sounds like a bad joke, but this is a comedy anyway. He's well suited to his character, an Easterner who, like Destry the year before, is not quite the tenderfoot he seems. Wonderful use of character actors, including Broderick Crawford and Warren William, both of whom sound equally as Eastern as Tone--a choice that makes sense for a plot that is all about appearance vs. reality. The Siren's biggest laugh came with Mischa Auer, playing a carnival performer who's disguised himself as an aristocratic Southern lawyer, announces that he's the representative of "Hayes, Hayes, Hayes and [epic throat-clearing] Hayes." The stunts and the riding are breathtaking, although the telltale signs of tripwires distressed the Siren. Peggy Moran plays the cute-as-a-cap-pistol rancher's daughter, who's identified as being 17 to Franchot Tone's whatever (in 1940 he was 35). Everyone jokes about this, and Moran throws herself at Tone (and I don't mean that metaphorically) but Dwan stages the antics with such a light touch that it doesn't feel sleazy; not much, anyway. 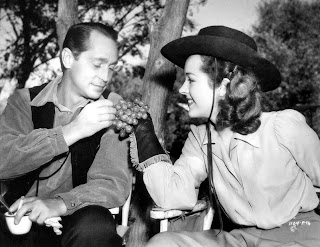 Aside: Moran had a short career, largely because she married director Henry Koster in 1942. The Siren ran across this, from a late-life interview with Moran, and had to include it:


My husband told me that if I quit my 'so-called career,' he would make sure my face was in every one of his future films. I thought that was a pretty good proposition. Except his idea was to have a bust of me [by Yucca Salamunich] which he afterwards placed somewhere in all of his movies. So the next time you watch The Bishop's Wife, Harvey or The Robe, look for my head. 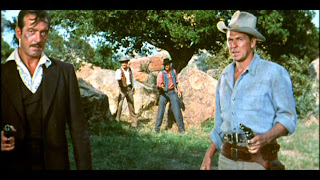 Oh looky here, a Western with a very good performance by Ronald Reagan--Peter Bogdanovich calls it Reagan's most likable work. Reagan plays the no-name Cowpoke, a man who's meant to embody simple decency, somebody who does the right thing because the wrong thing never even pops into his brain. The actor was 44, about 20 years older than Cowpoke's supposed to be, but Reagan was so good at playing naive that his casting didn't bother the Siren. The attachment between Cowpoke and Tennessee (John Payne, in a role that suits him much more) feels sincerely romantic. As is often the case in later Dwan movies, the women (especially Rhonda Fleming as "the Duchess") are the ones with their heads screwed on straight. The Siren loved the way Dwan's camera sneaks around the poker games in Fleming's house of ill repute, turning the audience into one of Rhonda Fleming's "girls" trying to have a peek at what the men are, um, holding. The parlor in the place is also huge and sparsely furnished, giving Dwan plenty of room to have a mob storm across it. This movie also indulged the Siren's love for goofy theme songs in non-musicals. The title song's called "Heart of Gold" (hold the Neil Young jokes, please) and it's sung over the opening credits, as well as by Fleming as she takes a bubble bath. Plus Coleen Gray, so sweet and innocent in Nightmare Alley, playing the money-grubbing Goldie. Gray has a marvelous response to the sign on the Duchess' front door: "Marriage Market." The whole movie has a mixture of practicality (isn't that sign truth in advertising?) and idealism (Cowpoke) that feels very Dwan. Bonus: 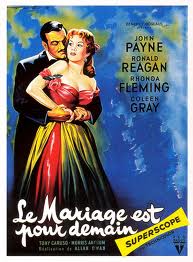 The French title ("Marriage Is For Tomorrow") 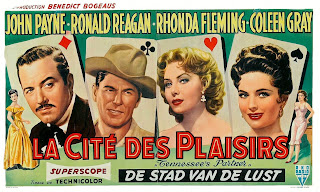 and the Belgian title ("City of Pleasures").

Where you standing in the Slightly Scarlet And Very Unhappy line with me that Sunday? Maybe I was the one grousing with you. Not getting in, I too ordered the DVD and had exactly the same reaction to the film.

Now I'm mad I didn't get in because I want to know if the black-and-white print played any better than the color version I saw on my TV. Of course I supposed I could always change the color controls, but that seems like cheating.

I was doing some research in the Selznick papers in Austin earlier in the year, and it seems to have been pretty common for them to strike b&w copies of color films for smaller markets where distributors could not afford the color prints (e.g. W. Africa) -- so even at the time of the original release, some audiences were experiencing these films as b&w films, which fascinates me.

Pordenone, I am a short redhead -- does that sound familiar? I was definitely commiserating with someone! And then my friends were the last people to get in ahead of me. I had heard that it was a b&w print too but I forgot to ask him. I couldn't believe it; the big joy to Slightly Scarlet is Alton's color cinematography if you ask me.

Gareth, I am always amazed at how much information people here have. That IS fascinating! What I would really like to know now is how did that affect the director and DP's choices, if at all? Did they just make it to look good in color, with no thought to how the cut-rate b&w prints would look? Or did they try for compositions that wouldn't be hopeless in b&w? The Restless Breed looked odd, the contrasts didn't feel right at all. I think even if I didn't realize it was supposed to be color I would have found it that way.

My guess is the answer is "it depended." The internal correspondence from the Selznick papers makes clear that they made extensive efforts to strike high-quality copies, but it's not clear that the directors took this into account since these were really just for a small segment of the audience.

On one occasion, Selznick supplied his own color print of A Star is Born, and on another he called a halt to the use of b&w prints of Jennifer Jones films in South Africa, on the basis that it could negatively impact the star's image there (that was a pretty solid earning market for Selznick, even if small by world standards).

I'm hoping to see if I can trace similar information for Warners and other studios at archives in LA.

Scott Marlowe was One Strange Dude. His best-known film is Alexander Singer's A Cold Wind in August where he was cast as a presumably naïve youth who falls in love with Lola Albright's world-weary stripper. In real life it was Marlowe who was world-weary. Back in the 70's I used to run into him in L.A. gay bars all the time. He was NOT friendly.

David Ehrenstein - what the what?! How wonderful. I remember John Waters raving about A Cold Wind in August as one of his all-time favorites and I managed to see it once on some obscure cable TV station when I was a teenager. Great film! Scott Marlowe was a real beauty - you could totally see why he turned poor Lola Albright's character into a chicken hawk!