Autumn Sonata at The Criterion Collection 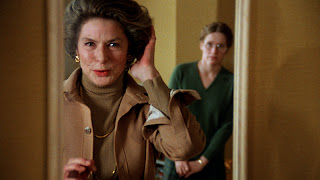 The film concerns Charlotte, a concert pianist (Ingrid Bergman) who visits her adult daughter Eva (an exceptional Liv Ullmann) without realizing that Eva still carries years of pent-up resentment for the way she was shunted aside as a child. What follows is an excerpt from the essay. You can read the whole thing at the Criterion site. Better still, get the Blu-Ray. It's an extraordinary film that shows how the feelings of two women in a single house can be as vividly cinematic as an army roaming a vast battlefield location.

For Autumn Sonata, Bergman built his screenplay around exposition. Each revelation about Charlotte comes like another page of the indictment. She wasn’t just absent on tour for much of Eva’s childhood, leaving the girl to keep vigil with her father (Erland Josephson); Charlotte had an affair that resulted in her leaving both husband and children for eight months (the child Eva, shown in flashback, is played by Linn Bergman). She didn’t just leave Eva and her son-in-law alone; Charlotte didn’t show up for Eva’s pregnancy or her one grandchild’s birth (“I was recording all the Mozart sonatas. I hadn’t one day free,” she reminds Viktor). Evidently, Charlotte never came even after Erik died, although no one bothers to throw that at her. There’s so much else to choose from, like putting Helena in a home and never visiting.

The amount of harm that Charlotte has inflicted over one not-terribly-long lifetime could fill a miniseries. Indeed, this sort of story line recurs in classic Hollywood melodrama, where a selfish mother is the worst kind of villainess, like the parasitic Gladys Cooper in Now, Voyager, nagging Bette Davis into a wreck who winds up physically resembling Ullmann in Autumn Sonata, right down to the wire-rim glasses. Watch Autumn Sonata and other movie mothers may start to drift through your mind: Mary Astor, the pianist in The Great Lie, leaving her baby behind with Davis, then embarking on a world tour because (no other reason is plausibly suggested) she’s a heartless bitch; Davis—now the bad mom—in Mr. Skeffington, abandoning her lovelorn husband and daughter so she can pursue flirtations, lunches, and shopping; Lana Turner lighting up more for her show business pals than she does for her daughter in Imitation of Life (which Charlotte’s phone call to her agent echoes).

Congratulations on a superb piece, placed where it should be. you write so well about the continuity and integrity of Ingrid Bergman's work--and yes she is great--and thereby underscore an essential unity in film history between art and commercial film. One may regret the other great Bergman's swipe at Hollywood acting styles; I think of Berman's performance in Autumn Sonata as her Intermezzo character in late middle age having made all the sacrifices enjoined upon her and showing the damage. But then I've always thought of Intermezzo as proto-Bergman with Leslie Howard as the wavering artist-intellectual figure later to be played by Max von Sydow.

This is the most even handed exposition and review I have ever seen of this movie. (I think it has taken about three decades for the political correctness brigade to get their knickers untwisted over this one.) When it initially appeared in the U.S., Autumn Sonata was heavily criticized as a negative depiction of a successful career woman and her mousy, whiny daughter! Really! ("Shame on Ingmar Bergman for making a film like this "now!" was the tone of most reviewers.) However, it does not seem like --then or now-- something I would want to sit through. I read a wonderful interview with Pia Lindstrom and Ingrid Bergman in the 1970's where they both talked about how they established a loving relationship with each other after the Stromboli scandal and subsequent separation from each other. Ingrid Bergman was great in her 1940's U.S. films, the ones with which I am most familiar. I recently saw "The Inn Of The Sixth Happiness," an apparently completely fictionalized account of a real woman; and the very dated "Indiscreet." (I saw this one with my mother in 1958, and was barely aware of what was going on.) Well, I guess they're both pretty dated! But, I enjoyed both, mainly because Bergman was in them. Cary Grant didn't hurt either!

Thank you XT, I really appreciate your praise, always. Intermezzo would make a fine double feature with Autumn Sonata, bracketing Ingrid's career as it does. Your observation about Howard's character makes it even more interesting.

Lemora, thank you too. I'm the first one to admit that Autumn Sonata is a hard sit, although I deliberately didn't read the contemporary reviews for fear they'd influence my own too much. When I rewatched it for this Criterion issue, as I implied in my opening graf, I recoiled a little bit. It is so harsh. But I really believe that part of its virtue lies in an unflinching view of what being an artist costs the people around you. It is dark, but quite brilliant, and not nearly as unsympathetic to Charlotte as it seems on the surface.

As for "Inn" and "Indiscreet," they are both lovely in their way. Robert Donat's final scene in Inn is intensely moving.

Thanks for that splendid insight! As I recall, Charlotte not only criticizes her daughter's performance, she proceeds to play the piece again to show her how it's done. A painful scene and a subtler one than the image of the sick daughter flopping on the floor like a beached whale.

Thanks Rozsaphile! Yes, she plays it all over again and says that Chopin is manly, not sentimental. It's painful all right.

I was thinking of you, and film music, this week when I was reading about Oscar Levant in A Talent for Genius.

Thanks, and congratulations! Good piece. It's been years since I've seen the film, so I'm probably overdue. It's not my favorite of (Ingmar) Bergman's films, but I remember it as gutsy and featuring superb performances. (Meanwhile, I just saw that Liv Ullman is directing a film of Miss Julie with a good cast.)