The Uninvited (1944) at The Criterion Collection 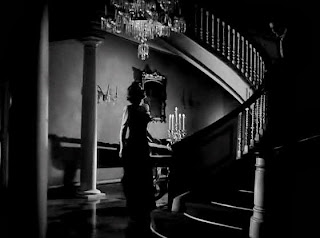 Just in time for Halloween, the Criterion Collection has done us all an enormous favor by releasing one of the screen's great ghost stories, Lewis Allen's remarkable The Uninvited, starring Ray Milland, Ruth Hussey, Gail Russell, Cornelia Otis Skinner and Donald Crisp. It's a supreme example of how black-and-white conjures danger, romance and the supernatural. The film is an object of veneration for its fans, which include Martin Scorsese and Guillermo del Toro. But for a long while it's also been condemned to a shadow world of bad copies made from questionable sources. Criterion has, as always, come up with a version that's worthy of the way it must have looked in 1944.

The author of the source novel for The Uninvited, Dorothy Macardle, was a most interesting person, born in Ireland to a rich Catholic family and growing up to teach English in a predominantly Protestant college until her Irish republican activities got her fired in 1923. Thereafter she did some time in prison during the Civil War, where she wrote some of her first ghost stories. Eamon de Valera was her friend and mentor, although they had a rough patch when Macardle objected to part of the 1937 Irish constitution pertaining to women. Macardle's fervent anti-Nazism led her to move to London during the war to work with refugees and with the BBC to help the war effort. When The Uninvited was released, according to the Irish Times, "among those who went to see it at the Savoy in Dublin was de Valera himself who, however, was not amused by the twist in the story"--one that doesn't exactly support a traditional view of pious womanhood. "Typical Dorothy," de Valera remarked. Macardle also wrote a famed history called The Irish Republic.

Meanwhile, rejoice at just how good The Uninvited is looking. Here's an excerpt from the Siren's essay.

The character of Stella is twenty; Russell was nineteen and looks younger. It was her first starring role, and she brings febrile intensity to it, moving from flirtatious humor to an orphan’s yearning for her mother to the desperation of a possessed woman. In real life, Russell wasn’t able to pull back. By all accounts an introverted and jittery person ill-suited to the Hollywood racket, she is said to have started drinking on the set of this movie in an attempt to calm herself between takes. Her very next film found her playing none other than Cornelia Otis Skinner, in the 1944 screen adaptation of Our Hearts Were Young and Gay, the autobiographical best seller that Skinner had cowritten with a college chum of hers a couple of years earlier—also directed by Allen, and another hit. For a short while in the 1940s, Russell’s ethereal style gained her roles in films like Frank Borzage’s Moonrise (1948). But by 1956, when she appeared in Budd Boetticher’s Seven Men from Now, alcoholism had coarsened her wondrous looks, and her career was nearly over. She died in 1961, of drinking-related causes, age thirty-six. The Uninvited, then, also offers a glimpse of Russell at her hopeful start, photographed in a way that justifies the fan magazines’ compari­sons to Hedy Lamarr.

Indeed, Allen’s most indispensable ally on The Uninvited was the great cinematographer Charles Lang Jr., whose work on the film was nominated for an Oscar. Windward House has no electricity; whether that’s because of its remote location or its having stood empty for years is never explained. In the event, this gives Lang an excuse for some of the eeriest lighting of the 1940s. Flashlights pierce the gloom, candles and oil lamps flicker, and the sea casts patterns of light on the ceiling. 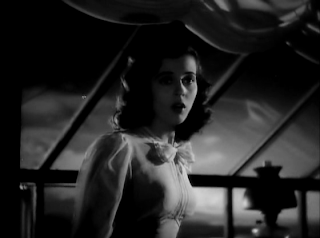 Thanks for the tip on The Uninvited. I haven't seen it, and I really don't know Lewis Allen's work at all, but I'm getting very interested in Charles Lang. He's done a lot of nice work. Sounds like the visuals in The Uninvited might be similar to the look he gave The Ghost and Mrs. Muir.

So glad this has finally gotten the restoration it deserves. I haven't seen it in years unfortunately due to the scarcity of its availability.

Gail is the focus and rightly the one who gets the most attention in reviews but I remember the playful interchanges between Ray Milland and the divine Ruth Hussey as the brother and sister who had just purchased the haunted house.

Poor Gail was one of the truly tragic stories of Hollywood. A quick internet search reveals so much sadness. Such a special presence on screen with those magnificent liquid eyes, a shame she was unable to cope with performing and couldn't find a way to leave it behind other than alcoholism.

I know that Jane Fonda based her character in The Morning After on Gail, a once promising talent fallen to blackouts and infamy. Her Viveca/Alex had a happier ending than Miss Russell though.

The screenplay of this film is terrific; a model for its kind--it has a sure-footed ability to create mood at the same time moving the story. This character-driven horror is exactly what a haunted house/horror film can be at its best, and the rare number of times this has been achieved attests how difficult it is to do. In other words, a real horror story works with characters and relationships, not special effects, and The Uninvited 'gets' this from start to finish.

Can't wait to see this as it was meant to be seen. My only experience has been with one of those badly depleted copies and even that was long ago....It's true that Gail Russell was certainly showing some wear and tear by the time she made 7 Men From Now, but for me, that only added to her charms--and she was still strikingly beautiful. FWIW I wrote about her performance in that film and those of some other "western" women here:

I don't know why exactly, but one thing really stays with me from that film is Ray Milland's wry grin of triumph as he walks down the stairs right at the end. Hmm, I'm pretty good at this exorcist thing, he seems to be thinking.

Milland was a wonderful actor at that point in his career. Later on, much later on, he sort of just grumpily walked through his films. Ironically, most of them were horror films, but nowhere near as good as THE UNINVITED. Maybe THAT'S why he was so grumpy!

Thanks so much, everybody! This film looks GREAT after the Criterion treatment, perfect for Halloween or any time really.

Interesting that Ray Milland doesn't mention this film at all in his memoirs, nor So Evil My Love which I think is one of his best performances, along with Alias Nick Beal which I just saw, and he doesn't mention that one either. Also, no River's Edge and as I recall no Dial M for Murder either! It's one of the thinnest autobiographies I have ever read. There's a fair bit on his 30s work, then it jumps to The Lost Weekend, and then a quick wrapup. I wonder if he turned it in unfinished, it's that weird. (Does anybody know the inside scoop?)

My belief, and only that, about the time Milland was preparing his biography things were going quite wrong personally between that actor and his son Danny. Tracey Keenan Wynn wrote a brilliant book, We Will Always Live In Beverly Hills, that touches on the serous and sometimes violent disagreements between the two.

Sorry about that but the book was written by Ned Wynn not Tracey.

Thank you; I've heard about that book before and need to get it.

So weird.I had literally never heard of this film until today when someone told me I couldn't call myself a classic movie maven unless I had watched it at least once, and then about half an hour later I find your post. Ok I guess I HAVE to see it asap.

I LOVE this movie, I have caught it on TCM several times. I will be buying the DVD, it is one of those movies I can watch over and over again. I find it deliciously scary-and as a huge Ruth Hussey fan, I adore her character in this movie!

Movies on my Mind said...

Hmm, I'm curious to see what del Toro does with Crimson Peak. He has often declared his adoration for The Uninvited, though he is now citing The Shining as a more tangible reference point.


The thing is that both the west England setting and classic gothic romanticism, Crimson Peak may actually become a crass updating of what Lewis Allen handled impeccably delicately. The movie may wrong do what is essentially a compelling melodrama designed to use a supernatural backdrop to make bigger statements about the human condition.

Ruth Hussey! That's all I needed to know. I'm sold.

I had been waiting for this movie, a favorite, for a long time. Criterion has put their usual fine package together, and at a much better than usual price. Your essay is a fine addition, thanks!

Just ran the Criterion Blu Ray. Tom interview and your essay are both welcome. I was not taken with the film but it does resonate. Russell's performance is not at all the equal of her work just a little later. Perhaps beginning with The Night Has A Thousand Eyes, but certainly in Angel And The Badman, Wake of The Red Witch and The Great Dan Patch. In any case, a tragic talent, as we all know, but a great actress. I wonder, had she stayed at the Henry Aldrich level just a little longer might she have not encountered a life of heavy drink and its unintended consequences.

The Tom, of course, is Tom Weaver.