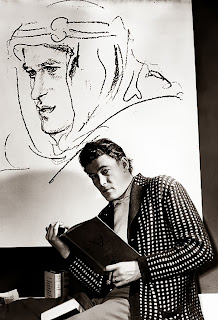 He suffered from his eyes; he had eight operations on his left eye alone. He also suffered from intestinal trouble and relieved the pain by drinking. He adopted the persona of the professional Irishman, and became noted for such eccentricities as never going out with his front door keys. “I just hope some bastard’s in,” he said.
— Kevin Brownlow, David Lean: A Biography

The most important influence in my life has been David Lean. I graduated in Lean, took my BA in Lean, working with him virtually day and night for two years. I learned about the camera and the lens and the lights, and now I know more than some directors do.
— Peter O’Toole, quoted in Brownlow.

…"I forget the sequence, but Peter pulled out his bag of tricks and absolutely stunned Willy. Really stunned him. Willy said, ‘Cut. Take. One protection shot.’ Then he burst out laughing and went over to him. ‘Pete,’ he said, ‘you did it to me.’ They really got along.”
— Jules Buck, O’Toole’s friend and business partner, talks about the making of How to Steal a Million, directed by William Wyler; quoted in Jan Herman’s A Talent for Trouble. [NB: This, and not Lawrence of Arabia, was the Siren’s introduction to O’Toole. And if you have no love for this caper, that’s all right, because the Siren has enough to compensate.]

He's read books, you know, it's amazing. He's drunk and wenched his way through London but he's thinking all the time.
— O’Toole as Henry II in Becket

I've snapped and plotted all my life. There's no other way to be alive, king, and fifty all at once.
— O’Toole as Henry II in The Lion in Winter 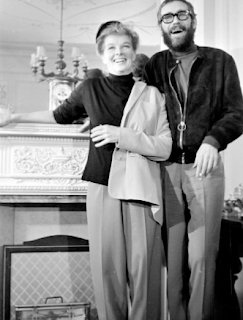 He can do anything. A bit cuckoo, but sweet and terribly funny.
— Katharine Hepburn, 1981 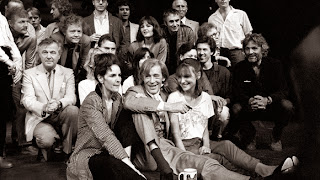 …”Your pal O’Toole,” he said, "has been murdered by the English critics.” “For what?” asked I. "For Macbeth,” said he. I phoned Peter that night as soon as the hours were right and managed to catch him before he’d left the Old Vic. I said, “a couple of boys from the BBC were over today to record my voice and they told me you’ve had a bit of stick from the critics.” “Yes.” “How are the houses?” I asked. “Packed.” “Then remember this my boy,” I said (he is 4 years younger), “you are the most original actor to come out of Britain since the war and fuck the critics.”
— The Richard Burton Diaries, Sept. 23, 1980 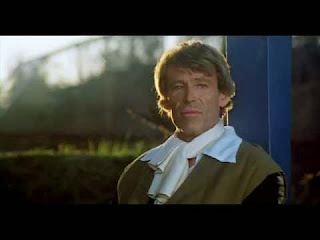 You constantly amaze me. You don't go to movies. What are you, a communist?
—O’Toole as Eli Cross in The Stunt Man (a performance he based on David Lean) 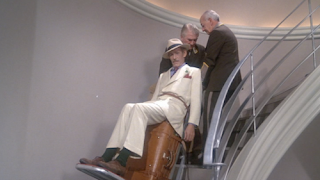 Since Masada and The Stunt Man, I’ve become madly partial to Peter O’Toole. I don’t know if he’s the best actor in the world, but I think he’s the most lordly, the most generous and pleasure-giving. When My Favorite Year ends with a shot of Alan Swann saluting the studio aduience by waving his sword in the air, the slow regal sweep of that wave itself seems like a bestowal of greatness. Without Peter O’Toole, My Favorite Year would have been an unassuming little item, but with him it tosses gleams with Shakespearean pluck and vigor, looses stray shafts of daring and mischief. The moist, hard-won gratitude in O’Toole’s eyes at the end of the movie becomes an emblem of happiness, his, and ours. Never say that the struggle naught availeth.
— James Wolcott, “Your Flick of Flicks,” in Critical Mass 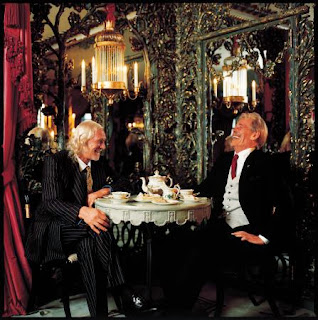 “You know…” [Harris] scruffled his beard. ‘He told me— Peter O’Toole told me— last week, it was. Well...I t-t-hink it was.” He reflected a moment. “Isn’t that great, to be alive while everyone else thinks you’ve clogged it?”
— Richard Harris, 1999; quoted in Blow-Up and Other Exaggerations by David Hemmings
Posted by The Siren at 8:07 PM

Labels: Actors and Acting, in memoriam

Delightfully, reading that second quote I could absolutely hear it in his voice.

Lovely tribute. I have never seen Lawrence of Arabia, but this has pushed me to finally watch it. (I know it's wonderful;have just never gotten around to it.)

I share your fondness for How to Steal a Million.

I'm too messed up about this one to have much to say, so thank you for assembling this fine bunch of anecdotes from excellent sources.

Been wondering why this one is so painful. Some of it was just him, the extraordinary force of his personality and its absolute originality. Some is, as a commenter said on a beautiful grieving thread earlier today, that it marks the end of an era, O'Toole being the last survivor of an stunningly gifted bunch of drunks who appalled and transported us.

If you haven't already, check out the clip of O'Toole and Welles talking Shakespeare on a BBC show in 1963, during O'Toole's run in Hamlet, when the critics weren't feeling it. It's a little bromantic, listening to these two agreeing and spurring each other on. Bet they got plastered after...

One of my favorites, he was never less than interesting, and frequently brilliant, and his stage acting was legendary. His bigger than life persona was no idle phrase, either. If i may, I'd like to point you to a marvelous article by Gay Talese, on a road trip with Peter:

Thanks so much to the Siren and Peter

Ahhhh. I loved him even in movies like "What's New Pussycat?", where he knew he was in a bad movie, but he soldiered on in good humour anyway. I love "How to Steal a Million" too, especially the scene where he gives Audrey Hepburn a cleaning woman's disguise and tells her "We'll give Givenchy the day off." I always wondered if that was an adlib! Think I'm going to go off and watch me some David Lean now...

Hey, I enjoyed the hell out of "How to Steal a Million." It was such a treat to watch Audrey Hepburn with a leading man her own age and one who could more than match her in looks and charm. If I want to commit movie fan heresy, I'll admit that I actually enjoyed that one more than Charade, although it's been a while for both.

I love that Peter O'Toole actually managed to stun "90-Take Willie" Wyler. That must have been something to see.

It won't be the same without O'Toole, that's for sure. He had enough personality for a hundred years of movies, but fifty-four is a damn good run.

Thanks everyone; I am so glad to hear How to Steal a Million has other fans. I always thought Hepburn & O'Toole had great chemistry. Was he, along with Grant, the only one to star opposite both Hepburn ladies? *ponders*

And Trish, What's New Pussycat? is one swingin' 60s comedy I love too. The way O'Toole says "pussycat"...swoon.

Vanwall, I'll check out that article when I'm a bit perkier. Ditto that clip, Misospecial. I need to recover. The capricious movie gods have dealt harshly with us this week.

LAWRENCE made him a star, but it was BECKET that displayed his range. Pauline Kael recalled news of the casting for the latter film and how she expected the man who played the ascetic visionary warrior to assume the role of the ecclesiastical saint. O'Toole's Henry seemed to come out of nowhere and made the actor momentarily invincible. Actually there had been a tradition of trading off the two roles in the Anouilh play. Laurence Olivier and Anthony Quinn swapped roles during the course of the Broadway run.

I felt the same way I felt back in 1983 when I heard that David Niven had died: the stars in the night sky were twinkling a little less brightly. I still need to see "How To Steal A Million." One of my favorite O'Toole scenes is the dream sequence in "What's New Pussycat" where he tells his analyst, "My job is a lecher's dream." Then begins a reverie about his first affair, with his school teacher. He's in short pants (hilariously played by O'Toole dressed as a British schoolboy) and she's an adult woman. As they embrace (in the classroom, I think, she says, "This will never work. I'm thirty four and you're twelve!" Just try and imagine anyone filming that scene today!