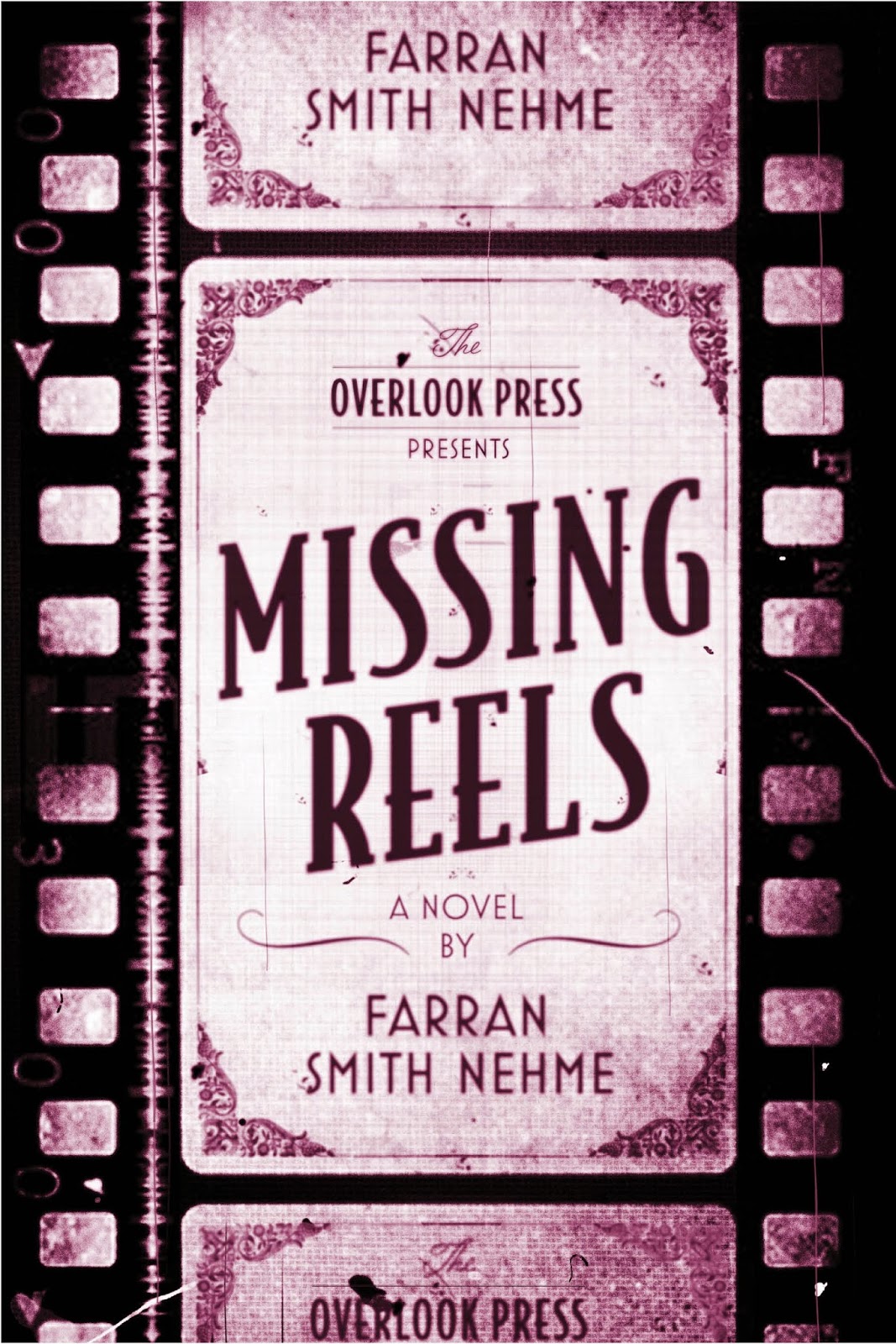 Voilà, one reason the Siren has been MIA for long stretches this year: Missing Reels, her first novel, will be published by the Overlook Press this November. It is available for pre-order at Amazon.com and BN.com.

For those of you who may be attending: On May 29, from about 11:30 am to 12:30 pm, in her everyday guise as plain old Farran Smith Nehme, the Siren will be at BookExpo America at the Javits Center in Manhattan, signing copies of the galleys at the Overlook Press booth.

Here’s part of the jacket copy as it stands now:

New York in the late 1980s. Ceinwen Reilly has just moved from Yazoo City, Mississippi, and she’s never going back, minimum wage job (vintage store salesgirl) and shabby apartment (Avenue C walkup) be damned. Who cares about earthly matters when Ceinwen can spend her days and her nights at fading movie houses—and most of the time that’s left trying to look like Jean Harlow?

One day, Ceinwen discovers that her downstairs neighbor may have—just possibly—starred in a forgotten silent film that hasn’t been seen for ages. So naturally, it’s time for a quest. She will track down the missing reels, she will impress her neighbor, and she will become a part of movie history: the archivist as ingénue.

As she embarks on her grand mission, Ceinwen meets a somewhat bumbling, very charming, 100 percent English math professor named Matthew, who is as rational as she is dreamy. Together, they will or will not discover the reels, will or will not fall in love, and will or will not encounter the obsessives that make up the New York silent film nut underworld.


The Siren started work on Missing Reels about three years ago, when friend Tom Shone (a novelist in his own right, and In the Rooms is wonderful) cheerfully suggested she write a novel. She decided that the revival-house scene in New York in the late 1980s (in its death throes, though most of us were in denial about that at the time) would be a good setting for a romantic comedy.

Naturally, Missing Reels also reflects the Siren’s obsessions which, as you know, are obsessive indeed.

So for fun, and to get back into the swing of things, the Siren figured she’d go through Missing Reels, and catalogue the film references. And from time to time, she’ll put up other posts with other photographs representing the vast and eclectic group of films and film folk that are mentioned — however briefly or obliquely — in her novel.

If nothing else, it will be decorative.

And afterward, the Siren has three half-finished posts awaiting her ministrations. She is eager to get back to her regularly irregular blogging schedule. She misses you guys, a lot.

And the first chapter.

Congratulations!! It seems alot of people on blogger land are writing books plus getting them published and promoting them. Your novel sounds like an excellent read and I should check it out for sure. I always dreampt that I would find some old lost silent film-that would be fantastic

Now there was a dynamite pre-code pair, Dietrich and Wong.

Many congratulations on your new book... I can't wait to read it. It is of course, in my wheelhouse... :D

Thank you so much, ladies. Yes, there's an element of wish-fulfillment in the plot...

I'm so excited! Alas, I will NOT be at BookExpo this year (I used to go annually, but life used to be simpler), but I will definitely order the book. Brava, Siren!

Can't wait to enjoy it!

Sounds slightly Dawn Powell (That's a huge compliment if you know me.)

The line accompanying that still of Dietrich and Wong is Marlene telling Anna Mae "Don't do anything foooolish!"

"New York in the late 1980s. Ceinwen Reilly has just moved from Yazoo City, Mississippi, and she’s never going back, minimum wage job (vintage store salesgirl) and shabby apartment (Avenue C walkup) be damned. Who cares about earthly matters when Ceinwen can spend her days and her nights at fading movie houses—and most of the time that’s left trying to look like Jean Harlow?"

She sounds fascinating! And yet oddly familiar...

How exciting, and how I miss the Regency cinema on Broadway. I saw so many wonderful old movies there including GWTW. I have dreams of winning the lottery, and opening a revival house, but hopefully one with a full liquor license.

Congratulations! I'm sure the novel will more than compensate for your absences ("Such absences!"--Philip Larkin). And further congrats on your publisher; Overlook is very classy.

Congratulations and best wishes for great success with what I know will be a terrific book.

Is there a book signing tour that goes beyond NYC?

Way to go Siren! We loyal readers at la Cinematheque Sirène Soi-disant applaud your assured triumph! Can't wait! Will your signing tour reach the Left Coast in the near future? Again, Bravo, Farran!

I love the premise of this book, well done, I will be reading it :)

I want it cuz you're fabulous! THAT.IS.ALL

Hello, Siren and congratulations! A new Revival House has opened near me, in Point Richmond, CA: The Magick Lantern: They show current films that didn't get fair play at the mainstream cinemas, and every Thursday night is Mystery Night, currently featuring Basil Rathbone as Sherlock Holmes. Since I swim at The Richmond Plunge, a fabulously restored 1926 indoor swimming pool, one block away, on Saturday mornings, matinees at the Lantern are perfect! I wish I could be at your book signing. Any chance you'll come out to the bay area? I first heard of The Oxbow Incident on prom night, when a group of us went back to my (college!) boyfriend's apartment to play charades. One of us acted that one out, and nobody got it.

I forgot to add, Anna May Wong played Tinkerbell in the silent Betty Bronson version of Peter Pan, made in about 1922. She made a beautiful Tinkerbell with wonderful flying effects. I wish I could find some screen captures of her as Tink. This is the earliest screen appearance I've ever seen of her.

Congratulations Siren! I am looking forward to reading "Missing Reels" when it hits the shelves, and I hope it sells millions, gets adapted into a terrific movie (starring who?), and makes you filthy rich. In the meantime, I'm sure I speak for everyone when I say we look forward to your return to regular (or even semi-regular) blogging. We've missed you. Good luck!

natt said...
This comment has been removed by the author.
1:54 PM

I'm overwhelmed with excitement! This will, without doubt, be my #1 winter read. Any book with a Jean Harlow reference gets my nod of approval. Throw in Bette Davis & there's a standing ovation. It goes without saying that, everything in the whole world, is little more tantalising with hint of Shanghai Lily. I'm just praying for Joan Crawford -- circa Grand Hotel, to get a mention.

Kathleen Geier said...
This comment has been removed by the author.
3:15 PM

Congratulations, Farran! I've ordered the book on Amazon and I can't wait to read it -- it sounds delightful. I've learned so much from your film writing and I always look forward to reading every word you write.

I moved away from my two-bit New Jersey hometown to attend college in NYC at about the same time the book is set and used to haunt the dwindling number of revival theaters there -- perhaps you and I passed each other like ships in the night.

I haven't been around these environs as much as I should be myself, but I'm so delighted to hear this.

Remember, whatever happens now, you finished the book and even got it published. You're already a big winner here. Congratulations .

Congratulations! And the cover looks wonderful- not to mention appropriate- considering the nature of the shabby obsession in question, ha.

Such happy news, Siren, and in a nice hardback, no less! I've pre-ordered at Amazon and am really looking forward to reading a novel by my favorite blogger!

Good news -- I'll be moving to Los Angeles soon, the better to focus on my classic Hollywood research! Just secured a large studio apartment, from which in my spare time (when I'm not involved in online proofreading) I'll able to visit places such as the Margaret Herrick Library at AMPAS and other research sites, not to mention LA repertory and revival houses. Really looking forward to becoming an Angeleno!

Siren, I somehow forgot to say that I've been a devoted fan ever since I found your blog four years ago by way of TCM. When I read your review of "Devotion," I was hooked. Let us know of a promotion tour if you do one to northern California. I've been enjoying reading through your entire archive, back to 2005.