It Happened One Night (1934) at Criterion 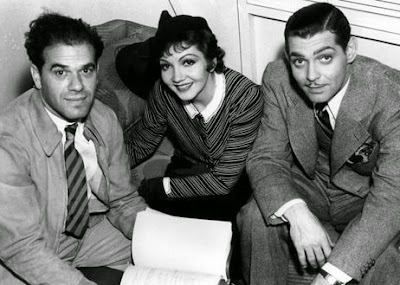 The Siren is still writing, oh yes she is. Here is an excerpt from her essay about It Happened One Night, part of the Blu-Ray package now available from the fine and fabulous folks at Criterion. You can read the Siren's essay in its entirety at their website.

It's been a particularly hard week for the world beyond the movie screen, and indeed a hard year. Frank Capra's joyous masterpiece was made at a time that was, in many respects, far harsher. Watching the film again (and again) and writing about the things that make it great was an uplifting experience. This movie has a true democratic spirit. This long weekend, you could do far worse than to watch It Happened One Night.

No matter what they watch, or whether or not they celebrate this American holiday, the Siren sends all her patient readers warm and loving Thanksgiving wishes.

Almost eighty years ago, the Academy Awards saw a clean sweep of its top five categories—screenplay, actor, actress, director, and picture—not by a grandiose epic or searing social drama but by a romantic comedy, a sparkling, gossamer thing about the love of a pampered heiress for a just-fired, often-drunk scamp of a reporter.

The film begins with the heiress already married to an obvious fortune hunter. Her father has imprisoned her on his yacht, demanding that she accept an annulment. She runs away on a Greyhound bus and finds herself mixed up with that scoop-hungry reporter. They spend one night together, then another. They fall in love. A bare plot synopsis hasn’t got much heft. And yet after all these years, It Happened One Night (1934) is almost universally acknowledged as one for the ages, its gorgeous spirit haunting all the romantic road trips, all the unlikely courtships, all the bickering, smitten couples that have come after.

It’s a movie both escapist and egalitarian. Director Frank Capra, that great American cheerleader, assures everyone that this fair country’s wide-open spaces, while not without peril, are full of fellowship and democracy. Our land can bring out the good in Ellen Andrews (Claudette Colbert), who is so spoiled that, in the first scene, she flings an entire steak dinner out a porthole. Her father (Walter Connolly) delivers a roundhouse slap, a moment that shocks them both. But for a Great Depression audience, one that Franklin Delano Roosevelt would still describe, in 1937, as “one-third . . . ill-housed, ill-clad, ill-nourished,” wasting a lavish meal would have bordered on the criminal. Comeuppance must be on its way — and so it is, in the guise of reporter Peter Warne (Clark Gable). When Pete is introduced, he’s on the phone with the editor who canned him. As an appreciative audience gathers to listen, Pete tilts a bottle of booze down his throat and defends an unprintably bad story with “That was free verse, ya gashouse palooka.” He remains fired, of course, wasting something else that was scarce and precious in 1934: a job.

An ideal romantic comedy doesn’t ignore reality; it converses with it. The Depression may be softened by moonlight and shining eyes, but it is everywhere visible in It Happened One Night, from the woman on the bus who faints from hunger to the freight car full of hoboes who wave back at a joyous Pete as he races to propose to Ellie. One of the loveliest shots in the movie is the exquisite track that follows Ellie as she makes her way to the autocamp’s communal shower, while children chase each other and weary adults prepare to get back on the road. 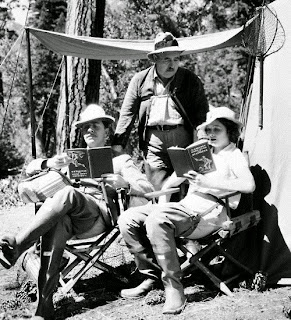 It's publication day for the Siren’s novel, Missing Reels! This happy occasion was supposed to occur last week, but her book about lost movies apparently decided on the very Method promotional technique of getting a bit lost itself. Missing Reels is now found, however, and available at your local bookseller, and Amazon, or try Barnes and Noble, or direct from Overlook Press. It's also available for Kindle and Nook.

The Siren will be making some promotional appearances around New York City, and one in Washington, D.C. (other cities are possible, but not confirmed):


New: The Siren did a Q-and-A with her idol, the fabulous Molly Haskell, at Criterion. Love the title (not the Siren's!): "Downtown Screwball." Yup, that was life in the 1980s in New York, all right.

There is a substantial excerpt from the book at Rogerebert.com.

Very nice writeup for Missing Reels in the Movie News section of the TCM website.

If you want to try before you buy, there is a lengthy excerpt from the book at The Evening Class, Michael Guillen’s very fine blog.

Raquel S. of Out of the Past is a blogging stalwart and a well-known name around these parts; the Siren’s been reading Raquel's wonderful classic-film and book posts for years now. She has a lovely review of the novel up.

And the Siren’s readers well know that Glenn Kenny is a Close Personal Friend. He has a funny, thoughtful review up at Some Came Running, along with a review of another (very different) movie-themed novel, The Absolution of Roberto Acestes Laing by Nicholas Rombes, which sounds most interesting.

The Siren discussed Missing Reels, and film preservation, at Hollywood Time Machine, the online classic-film radio show hosted by Alicia Mayer and Will McKinley. The show is available in podcast form here. Bonus: Lou Lumenick of the New York Post talks about movie history and movie rights, and the delightful Eve Golden discusses her biography of John Gilbert, which everyone should be reading.

The Siren adored Silent London's review, because it comes from a fine writer and kindred spirit, because the folks there recognize the name Mordaunt Hall, and because she did not expect to be compared to Fever Pitch.


***
The Siren has already gone into the writing, theme etc. of Missing Reels, so this won’t be a yammer-y post. To avoid spamming her own blog with updates, reviews, etc., the Siren is going to use this as Grand Central Station for all things Missing Reels, and update this post from time to time. (At least, until such time as she possibly gets a second website together. Which could take a while.) Also, there’s always the Siren on Twitter, @selfstyledsiren, or befriend her under her real name, Farran Smith Nehme, on Facebook. (But do drop her a line first, to let her know who you are.)

Meanwhile, now that the extensive work of launching Missing Reels has lessened, the Siren hopes to take her posting back from “where the heck have you been,” to “dependably sporadic,” as soon as possible.
Posted by The Siren at 8:00 AM 13 comments: