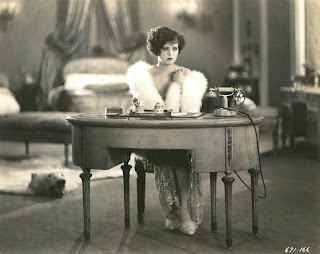 Back in 2000, David Stenn’s biography of Clara Bow, Runnin’ Wild, changed the way the Siren looked at this star. Years of scurrilous gossip about Bow, combined with films that were seldom screened (the glorious It and Wings being exceptions) had obscured her talent. Stenn used careful research to debunk every rumor, to blow the dust off Bow’s image, and to show the appeal of her acting and the courage with which she faced life.

On Sunday Nov. 15 at 1 pm at the Museum of Modern Art, Stenn is introducing a restoration of Bow’s 1927 vehicle Get Your Man. Carefully pieced together via the Library of Congress from rediscovered nitrate stock, stills and intertitles, this is the most complete version of the film we have, or are ever likely to get. Stenn’s dedication to his subject, 15 years after his biography was published, may be judged from the fact that he helped fund the restoration.

Directed by Dorothy Arzner, Get Your Man is absolutely charming, made when Bow’s stardom was at its height. The story is an excuse for freewheeling Bow to up-end the lives of the upper crust, as was often the case. She plays Nancy Worthington, a New Yorker in Paris for the first time, who encounters Robert Albin (Charles “Buddy” Rogers), the handsome son of a French duke (Josef Swickard) and falls for him when they must spend the night together in a wax museum. Trouble is, Robert was betrothed in childhood to Simone (Josephine Dunn, with some truly terrible ringlets), the daughter of a neighboring marquis (Harvey Clark). Nothing can stand in Nancy’s way, however. She manages to fake her way into the Albin family chateau, the better to fulfill the movie’s title.

The first part of the film, showing Robert’s betrothal to the infant Simone and a series of scenes where he and Nancy bump into one another in Paris, is more or less intact, with a few scenes showing obvious nitrate decay. (The Siren, with her love of fragrance, was entranced with a segment where Nancy visits a perfume shop, and the shopgirl hands over a scent sample that has been sprayed on a silk rose. Beats paper blotters any day.) Midway through Robert and Nancy’s encounter in the wax museum, the still-based reconstruction begins — but it’s been done in a way that manages to preserve some of the wit and verve of the rest of the movie. 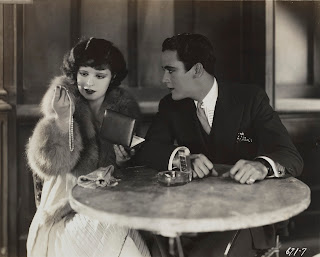 Once Nancy takes advantage of a taxi accident to “convalesce” chez d’Albin, the movie truly gets underway. (The Siren’s favorite Bow moment comes when Nancy is preparing to fake injury next to the crumpled taxi. She arranges her chic little case next to her, stretches out, then has a second thought, and pops up back up for a moment to powder her nose.) Like Mabel Normand, Bow is best appreciated in motion: the smiles, the knowing glances when someone’s back is turned, the way her face registers delight every time some man is about to play into her hands. And they all do, sooner or later.

Rogers is amazingly handsome, Swickard and Clark are often very funny, but it’s Bow who dominates, and Arzner seems to know that wherever Clara lands in the frame, that’s where our eyes will go, as well. It’s not just her beauty, or even her sex appeal; there is intelligence in Clara Bow, and a vivid and irresistible sweetness. In Stenn’s book, he quotes Arzner: “They all called Clara the ‘It’ Girl, the outstanding flaming youth. Well, she was all that, but I think she was also the one flaming youth that thought.” 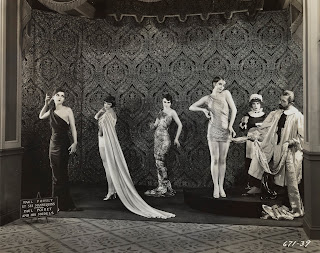 Screening along with Get Your Man is the MGM convention reel from 1937 that led to a rape case, which David Stenn worked long and hard to bring to light both in a Vanity Fair article and in his documentary Girl 27.

Finally, there is a newsreel called Movie Star Nights in Paris, showing Ingrid Bergman, Rita Hayworth and recent Google Doodle honoree Hedy Lamarr at the height of their fame and glamour, working a UN benefit for children in 1948. The Siren’s longtime readers know about her ties to France and her deep love for Paris. It has been a hard 24 hours. But perhaps these scenes of Paris not long after a terrible war will serve as a reminder that la Ville Lumière is nothing if not resilient.

(The complete program will also screen at MoMA on Thurs. Nov. 19, at 4 pm, but Stenn is introducing only Sunday's screening. Get Your Man is part of MoMA's annual festival of preservation, To Save and Project, one of the cinephile events of the year in New York.)