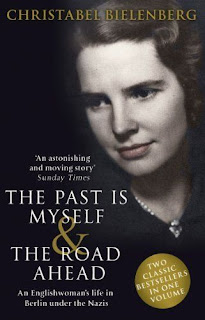 Good Lord, that gives me chills. I have the same feeling that we've seen this moment before in history, when angry bigots handed power to do terrible harm to a dangerous man.

Yes. Yes. This is the comparison to Hitler. Not the Final Solution, or the Nazi Party, but this.

Karen, yes, that's precisely what I meant; I don't foresee Trump as a genocidal monster, although I laughed long and hard at Matt Taibbi's remark that "Trump would eat a child in a lifeboat." But the inability to face up to his popularity, and what it means, we've seen that before.

I think his popularity is partly a way for a lot of people feeling Washington has forgotten them to poke a figurative finger in the eye of the establishment. Unfortunately they are not focusing on the fact that he just isn't qualified by experience or temperament to be president.

Thanks for the clarification on comparing Trump to Hitler, Farran. I think the problem is that it is hard to separate Hitler the politician from the murderous policies of the Nazi regime. The political writer Charles Pierce at Esquire compares Trump to Huey Long. So I guess it's time to watch ALL THE KING'S MEN and, myself being a Cagney fan, A LION IS IN THE STREETS.

Patrick -- That is true. It is also a way for people to express their racism and xenophobia.

There has been a strong taste for chauvinistic authoritarianism among a certain segment of the American people for a long time (just as there is in the UK, France, etc.) -- it's just that our two-party system hadn't typically allowed this 'bloc' to find expression in a viable (?) national candidate. Now it has.

Patrick Wahl, some commentators are calling the (seeming) popularity of Trump "the middle finger vote."

Another deep dive into the rise of Hitler from a talented observer is Sebastian Haffner's Defying Hitler. My notes are available at http://www.dailykos.com/story/2005/10/12/156233/-

Wow, glad to see this comparison.
When Trump started in on illegal immigrants as a primary problem all I could think of was ( to paraphrase) Max Feldman in Skokie:
"I said to myself, Max, somewhere I've heard this before. It was in Germany, before the war."

Although not much given to quoting Marx, I believe that we're seeing history repeating itself, first as tragedy (Reagan) and then as farce (Trump), in other words, that the rise of the latter may portend the final crash and burn of the far right in mainstream American politics.

Thanks, Farran. I am up to here with complacent progressives who say soothingly that Trump is nothing to worry about. One said that HRC will settle his hash—Trump is no doubt trembling at the thought. Another dismissal is people saying he's stupid. I don't know why people think a person or group being stupid means they do not constitute a threat. Some of this seems like a black swan issue: This election cycle and Trump defy comparison to any we have experienced, but most people keep insisting that they understand what's happening, that it's normal. While I don't think it's ever possible to analyze these things without the detachment of time, we have to react in real time. The best we may be able to do is to acknowledge that we're in a new situation and we don't get it. That at least allows the flexibility of improvisation, instead of counting on the old verities to save us.

A hundred years hence, if in fact they're still making films with a beginning a middle and an end, I wonder what a future Anthony Mann might make of "The Fall of the American Empire." It's coming, my friends, trust me. The Persian, the Roman, the British Empires all came with a shelf life. Now it's our turn. Find shelter... wear a hat.

Not being in America, or an American, I don't have a say, obviously.

But I did spend quite a while wondering when Americans (or some) Americans were going to notice that his rhetoric and way of operating was eerily similar to Germany (and to be fair to Germany many other countries) in the early - mid 30s...

I sometimes think people forget when they're saying that 'there's nothing wrong with being anti Muslim' (a comment I'm seeing a lot lately, on both sides of the Atlantic), for instance, that they're actually saying 'there's nothing wrong with being anti Semitic' - Islam being one of the Semitic religions it amounts to the same thing.
Like I said, spookily familiar (even more so because I just finished reading Umberto Eco's 'The Prague Cemetery' which is a fictionalised account of the forging of the Protocols of the Elders of Zion, upon which much of the anti Semitism of the 20th century was propped).

Adam Gopnik of "The New Yorker" magazine has just written a prescient and all-too-accurate article expressing the same concerns:
http://www.newyorker.com/news/daily-comment/going-there-with-donald-trump

Seems that past Hollywood efforts anticipate ever latent U.S.A Fascism. To Wit: Gabriel over the White house, Meet John Doe, A Face in the Crowd. . .

At least the bloviations were somewhat literate!

@misospecial: Let me run this by you (and everybody else here commenting) about why Trump might still lose:

Something from one of the past eras this blog celebrates for everybody here to think about:

And remember to get the message out about Trump, work your asses to to get others to vote, and vote yourselves as well.