(The unabridged and updated version of a Siren column about the 1927 silent version of Chicago, first published behind a paywall at the now-defunct Nomad Widescreen.)

Nothing guarantees immortality for a murderer quite like getting away with it, as Lizzie Borden could have told you. So could Beulah Annan, the woman who, in 1924, shot a lover foolhardy enough to threaten to leave her — and who walked out of a courtroom 13 months later, a free woman. The story so captured her city and era that a play, a musical and two movie versions bear only the name of her town as a title: Chicago.

The 2002 Oscar-winner was a hashhouse mess that threw the Broadway musical revival's greatest asset — its Bob Fosse-inspired choreography — into a whirling Cuisinart of cuts. Director Rob Marshall demonstrated an uncanny instinct for slowing down the numbers that needed to sizzle, and cranking up the ones that needed some quiet. Trust the Siren, it’s a much better idea to turn to the 1927 silent and see how delightful this little cyanide pellet of a story remains.

Based on a 1926 hit play by Maurine Dallas Watkins, who covered both Beulah and a similar murderess for the Chicago Tribune, the film unspools the simple tale of a simple woman with two simple needs: fortune and fame, in that order. Roxie Hart (Phyllis Haver) is married to Amos (Victor Varconi). Amos works at a news-and-candy stand; he is poor, honest, hardworking, and loves his wee girly with all his handsome, sappy heart. Roxie, naturally, is sick to death of him, and has been carrying on with Rodney Casely (Eugene Pallette), who provides her with all the niceties.

In this silent movie Pallette is of course bereft of his famous voice, which sounded like a bullfrog trying to climb out of a tuba. But Pallette is young(ish), virile, many pounds lighter than in My Man Godrey nine years later and, more to the point, his character Casely has money. Money that he has been spending on Roxie, and money that he has decided, it transpires, to spend on something else. What that something else may be we are destined never to know, for when Rodney arrives at a tryst and rudely announces he's giving Roxie the air, she airs him in return, with a couple of bullet holes. 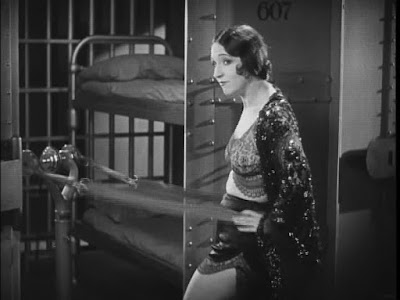 Amos, once over the shock of discovering Roxie isn't the true-blue sweetie he thought, attempts to take the rap for her, but is foiled by a wily, ambitious assistant district attorney (Warner Richmond). Roxie lands in jail and encounters the Matron (May Robson) plus an assortment of other female murderers, including Two-Gun Rosie (Viola Louie) the tragic Teresa (who isn't billed) and "The Real Lady,” later called Velma Kelly in the musicals, here played by a skinny, menacing and altogether fabulous Julia Faye. (Faye even bears a spooky resemblance to Bebe Neuwirth, who played Velma in the 1996 Broadway revival of Chicago.)

The rest of the film is taken up with watching Roxie scheme and feud from jail cell to courtroom, while Amos slides further into chump-dom as he attempts to rob the jailhouse lawyer (William Flynn) who's promised to get Rosie an acquittal. The idea is to pay the crooked shyster with his own money, and it’s a pretty good scheme for someone capable of doing it competently, which needless to say Amos is not. 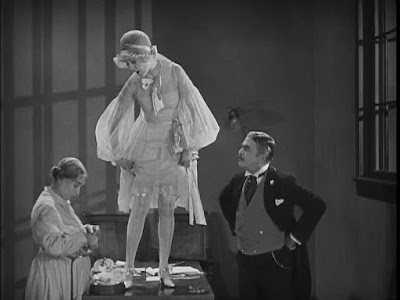 Notice there has been so far no discussion of the director. That's because, well, pull up a chair. The name on the credits is Frank Urson, but Flicker Alley's excellent DVD edition includes a liner-note essay, "Who Directed Chicago?," indicating that even at the time of the movie’s release, producer Cecil B. DeMille was widely believed to have done most of the directing. But the essay muddles things further by noting that DeMille took over direction after seven days of photography. Then, in the next sentence, it asserts: "Urson seems to have directed much of the film." In his biography of DeMille, Empire of Dreams, Scott Eyman says the producer wound up "stepping in and directing a fair amount of the picture himself."

All clear then? No? Then it's best to look at Chicago itself, which is studded with moments that fairly screech DeMille, like the lingering shots of the opium-den splendor of the lawyer's lair. Who knew jailhouse work could inspire a highly developed taste for chinoiserie, down to an elegant marble inkwell where you can stash your cash payoffs? There's also the major role played by Roxie's garters, which have little tinkling bells attached to them. A catfight between Roxie and the Real Lady is shot in a lip-licking style any viewer of DeMille's ancient-world epics will recognize, and Fritzi of the wonderful Movies, Silently, believes that’s another thing that indicates DeMille was in charge: Julia Faye was C.B.’s mistress at the time. Plus,

DeMille kept every film he directed in his personal film vault. Of all the dozens of films released as programmers and specials under the DeMille banner, there was only one movie found in that personal vault that did not have DeMille as the credited director. You guessed it, that movie was Chicago. 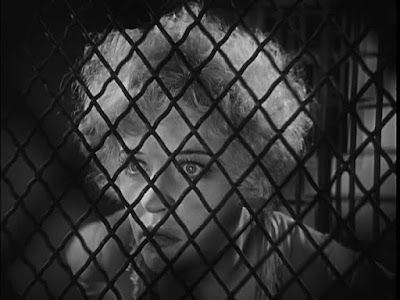 Frizzy-haired, sulky-sexy Phyllis Haver was one of Mack Sennett's original Bathing Beauties at age 16, earning a salary of $12 a week before moving on to DeMille's production company and performances in The Way of All Flesh (which is now, sadly, a lost film), What Price Glory?, and this picture, her biggest and best role. "I wasn't much of an actress," she told Sennett in his memoirs, but he begged to differ, and so will anyone watching Chicago. Her Roxie is a study in comic venality, dismissing flashes of conscience in the time it takes to powder her nose — which she does in the mirror that’s just been shattered by one of the bullets she fired at her lover.

Roxie makes little moues at Amos and at strategic moments she deploys baby-talk, helpfully spelled out in the intertitles. Judging by this movie and Booth Tarkington's novel Seventeen, as well as boop-a-doop singer Helen Kane and others, there was a near-epidemic of female baby-talk in the Jazz Age, and it threatened the sanity of many an otherwise stable man. Haver plays Roxie like a child in other ways, whether she's chewing energetically while Amos embraces her or giving him a kittenish look of apology when he accuses her of faithlessness.

Even the intertitles, not always a boon to a good silent movie, are funny — the Siren's favorite is the matron rebuking her charges with, “This is a decent jail, you can't act the way you do at home!” Despite some late-stage concessions to conventional morality, Chicago is a rambunctiously cynical film.
Posted by The Siren at 9:13 AM

If you want to see Eugene Pallette as a shockingly thin and handsome young man, see "Intolerance", specifically the French part of that story in which Pallette plays Prosper, the dashing cavalier.

Your citing of the "near-epidemic of baby talk in the Jazz Age" finally explained to me the canoe scene in 1932's "Horsefeathers" (https://www.youtube.com/watch?v=lhrjnSyKBYw). For 50 years I've wondered why Connie, "the college widow", talked that way in that scene. Of course, with the Marx Brothers, finding logic is hopeless and, in the end, irrelevant.
Thanks for the Chicago posting.
Tom Ovens
Port Townsend WA

Your citing of the "near-epidemic of baby talk in the Jazz Age" finally explained to me the canoe scene in 1932's "Horsefeathers" (https://www.youtube.com/watch?v=lhrjnSyKBYw). For 50 years I've wondered why Connie, "the college widow", talked baby talk in that scene. Of course, with the Marx Brothers, finding logic is hopeless and, in the end, irrelevant.
Thanks for the Chicago posting.
Tom Ovens
Port Townsend WA

Saw Palette at the New Yorker in the 1950s in "Intolerance". At the time perhaps the only venue for Silents, much avant la lettre.Even then a registry in back of the theatre captured some of the patron's vapid remarks. Plus ça change. Plus c'est la même chose!
P.S. Also presented was D.W. take on the German Depression: "Beasts we are! Beasts you have made us!"

So - what do you think of the 1942 "Roxie Hart", a bowdlerized version with a stupid ending? Ginger Rogers is very funny as Roxie, directed by William Wellman, and it does contain the immortal exchange where her father is called to a long-distance call, takes it, goes back to the porch, rocks for a while, and says to her mother, "They're going to hang Roxie." The mother replies, approvingly, "What did I tell you?" It reminds me of Wellman's pre-codes a bit.

I just bought Clive James's "Play All" and was thrilled to find your name among the dedicatees (if that's a word). Now, could you please post a little more often?