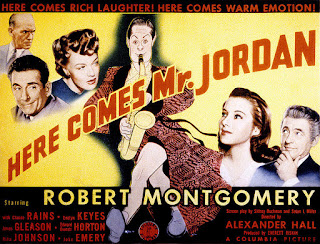 The Siren's essay for the Blu-Ray release of Here Comes Mr. Jordan, the immortal supernatural comedy made at Columbia in 1941 and directed by Alexander Hall, is now online at the Criterion Collection site. The story of Joe Pendleton (Robert Montgomery, in one of his best performances), a boxer whose soul is snatched too soon from a plane wreck, and the efforts of the Unmentioned Almighty's recording angel Mr. Jordan (Claude Rains) to restore him to a body (and life) that's "in the pink," stills plays like a charm.

The movie was released, as the Siren points out, during a year that was wall-to-wall with perfectly terrible news. And it was a huge hit. After watching Here Comes Mr. Jordan several times for this essay, the Siren can tell you that its restorative powers endure. The essay can be read in its entirety here. The Blu-Ray can be purchased at Criterion or wherever fine physical media are sold. 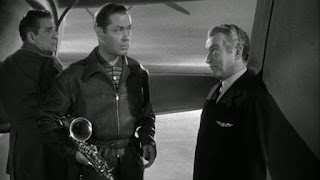 The much-loved Here Comes Mr. Jordan has spawned two direct remakes and a sequel, but the 1941 original retains a snap and a vigor—and a unique charm—that no other version has been able to duplicate. Why does it keep such a hold on our affections? Perhaps it’s the way it mixes elements in a way unique to its era—screwball comedy, slapstick farce, boxing fable, supernatural romance. Directed by Alexander Hall and released by Columbia Pictures, it boasts a just-crazy-enough premise—angels try to return the soul of a boxer, who has been mistakenly snatched by an overeager apprentice, to a ring-ready body back on Earth—yet has enough real-world pathos to leave a lasting emotional impact. The rollicking dialogue and gleefully complex plot, the film’s belief in friendship, destiny, and true love, and even—or perhaps especially—its indifference to theology and the permanence of death, are as irresistible as ever.

The movie has two bona fide stars: Robert Montgomery as boxer Joe Pendleton, showing off a convincing accent straight from New York’s outer boroughs, and Claude Rains and his heavenly voice as Mr. Jordan, the executive angel who must fix his underling’s mistake. The endless complications of the story arise from the early twist of Joe’s grief-stricken manager, Max (James Gleason), having Joe’s earthly remains cremated. Eventually Joe is deposited in the body of Bruce Farnsworth, a rich layabout whose wife (Rita Johnson) and secretary (John Emery) have just teamed to bump him off, or so they think. Joe isn’t keen on being a dissipated millionaire—he wants to regain his shot at the boxing championship with a body that’s “in the pink,” a phrase he repeats so often that even the serene Mr. Jordan tells him it’s “obnoxious.” But then Joe lays eyes on dewy Bette (Evelyn Keyes), a young woman whose father has been swindled by Farnsworth. To help her, Joe becomes Farnsworth, and settles for hiring a baffled but cooperative Max to train the body he’s got.

For Montgomery, this film marked a shift from the sophisticates he had played for much of his career. “The directors shoved a cocktail shaker in my hands and kept me shaking it for years,” he once remarked. He’d been permitted to put down the martinis for an acclaimed role as a Cockney serial killer menacing Rosalind Russell in 1937’s Night Must Fall. And in 1940, in something of a warm-up for Mr. Jordan, Montgomery had been an American bootlegger who somehow winds up inheriting a British title in The Earl of Chicago. But Joe Pendleton was the role that let Montgomery fully combine his comic abilities with a macho quality he’d rarely been allowed to display.

The thought of you blogging regularly again is probably too much to hope for, but I do miss these posts. I do miss this space. Thank you for this review.

This is a great review of a film I do love even the Beatty remake but this one is the best in my mind. I am a sucker for Claude Rains

I'm surprised more mention hasn't been made of the thematic similarity between HERE COMES MR. JORDAN and Powell and Pressburger's A MATTER OF LIFE AND DEATH, which appears pretty obvious to me, although what they do with the same basic premise is quite different. And let me add my voice to those very pleased to see your blog become more active again.