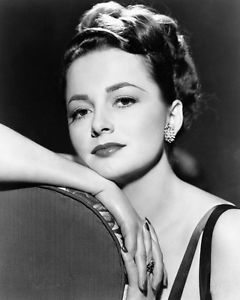 The Siren is proud to announce that she was asked by the venerable Sight & Sound to write a tribute to Olivia de Havilland on the occasion of that great lady's 100th birthday, which will occur on July 1. With their permission, she is posting an excerpt. You can purchase Sight & Sound here; if you want to know about all the goodies in the latest issue, click right here. 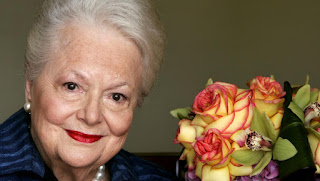 One thing you won't find in the Sight & Sound tribute, if you pick up a copy (and of course the Siren hopes you do): a discussion of the famous feud with Olivia's sister, Joan Fontaine. This was de Havilland's show all the way. For many years, even as she wrote about Fontaine, the Siren has insisted that she has fully as much admiration for de Havilland. Now, patient readers, the Siren has 2500 words in print to prove it.

And this was a pleasure to write. It entailed revisiting films ranging from The Snake Pit (de Havilland's personal favorite), to her Oscar winners The Heiress and To Each His Own, to de Havilland's marvelous work with Errol Flynn, to lesser-known gems like My Cousin Rachel. They all left the Siren more impressed than ever with the delicacy and emotional breadth of de Havilland's acting.

As part of her research, the Siren was permitted to listen to a recording of an extensive talk that de Havilland gave at the British Film Institute some years back. She discussed her entire career, and by the time she took questions from the audience, they were (of course) eating out of her hand. She spent a lot of time discussing the landmark "De Havilland decision" that finally cracked the ironclad legal agreements that kept some actors chained to a studio, unable to turn down lousy roles unless they wanted to serve out the missed time on the back end of the contract. She remembered every detail, and no wonder. It wasn't simply a matter of de Havilland calling in some hotshot lawyers and turning them loose. The Siren wanted this article to make clear that the case took two years, and demanded a great deal of personal sacrifice. De Havilland's famed graciousness and charm come along with a strong, ambitious and determined character.


By May 1943 her contract was up, and she happily anticipated a new phase. Now she could seek out more parts like the lovelorn schoolteacher betrayed by Charles Boyer in Mitchell Leisen’s Hold Back the Dawn (1941) – a ﬁlm she loved, and another Oscar nod, achieved on loan to Paramount. Not so fast, said the brothers Warner. She had to serve out the additional six months she had accrued on suspension. 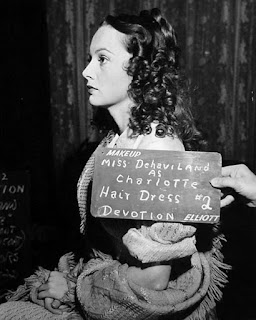 The lovely Livvy was tilting at windmills, was the consensus around town. Asked in her BFI interview if she garnered support from her colleagues, she said, without rancour, “I was rather by myself, because nobody thought I could win.” Her lawyer thought she could, however, by invoking an old California ‘anti-peonage’ (debt slavery) law which forbad contracts that extended past seven years. In November 1943 the case went to trial.

As soon as she ﬁled suit, Jack Warner wrote to every studio in town to remind them that she was still effectively under contract. In court the studio didn’t hesitate to ﬁght dirty, insinuating that an affair was the real reason the actress had turned down one movie. The Warner attorneys, however, hadn’t reckoned on the de Havilland sang froid. She had spent years on set with Michael Curtiz, one of the most notorious yellers in the business; these guys were nothing. So when one lawyer thundered, “Is it not true, Miss de Havilland, that on the morning of January 16, you wantonly refused to show up for work on Stage 8?” “Certainly not,” came the reply in that musical de Havilland voice. “I declined.”

The judge ruled for de Havilland, but not until March 1944. Warner Brothers appealed, Jack Warner dropped producers another line to say the matter was far from over, and for the rest of the year de Havilland stayed, as Otto Friedrich put it in City of Nets, his portrait of Hollywood in the 1940s, “unemployed and unemployable”.

For two years de Havilland made no movies, from the age of 26 to 28, vital years for an actress. Her legal bills mounted; she drew on her savings and, after the ﬁrst ruling in her favour, found some work on radio. She refused to give in, and she refused to stay idle. She travelled to Alaska to visit soldiers, and such was Warner’s pettiness that according to Friedrich, he wrote to General Hap Arnold seeking to blackball the actress to stop her entertaining the troops. Arnold, unlike Hollywood, told Warner to mind his own business. The court of appeals ruled in de Havilland’s favour, and Warner Brothers appealed to the California Supreme Court. She went to the South Paciﬁc, visiting the wounded and contracting pneumonia so severe that she coughed blood and her weight dropped to 90 pounds. De Havilland was convalescing in the hospital in the Fiji Islands when word came that the Supreme Court had refused to hear the studio’s appeal. She’d won. 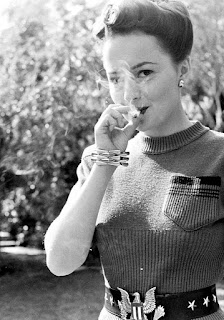 Years before, Bette Davis had failed in her attempt to challenge her contract. Jack Warner had just found out that his all-purpose flower-like ingénue was tougher than Jezebel.
Posted by The Siren at 11:25 AM

Great stuff—thanks for posting the excerpt, can't wait to see the rest of it.

Looking forward to the whole shebang!

Wonderful post about this great lady. I enjoyed reading this

The best part -- Olivia tells about a late encounter with Errol Flynn.

But could she speak Chinese? Mandarin de préférence!

It's always so good to see a new post from you, especially so in this case. De Havilland was a great actress.

"Hold Back The Dawn" is my favorite Olivia De Havilland role and one of my very favorite movies. My mother introduced me to it, and I think I've posted this here before. When she was young, my mother looked more like Olivia's sister than Joan Fontaine did, and watching this film especially makes me miss my mom. HBTD has some great location shots of outlying communities southeast of Los Angeles from the early nineteen forties. I think she was miscast in "My Cousin Rachel" and there is zero chemistry between Olivia and Richard Burton, for me anyway. That still from "The Snake Pit" shows Olivia with very modern-looking hair. In fact, this scene of her looking "frumpy" in the looney bin is what contemporary actresses look like after they've been styled! I may be mistaken about this, but isn't she the last Golden Age Leading Lady still living? I can't think of anyone else still around.

You Tube has a film clip of outtakes from "The Adventures Of Robin Hood" narrated by Rudy Behlmer, One scene was to be the actual ending but got trimmed. It shows Errol and Olivia riding a horse into the sunset, over rolling green meadows as far as the eye can see, with oak trees and a lake and mountains in the distance, to the west. This scene was filmed at Warner Ranch in the western San Fernando Valley, near what is now Woodland Hills and Oxnard Street. (It is sometimes misidentified as Calabasas, but it's not.) Today, this area is Warner Business Park, with shopping malls, sky scrapers, and acres of parking lots. I remember it as it was in the film, still unspoiled in the early 1950's. It's a beautiful scene showing Errol and Olivia in their prime, and I wish they'd left it in the film while the credits rolled.