A long time ago the Siren was asked in the comments to a post on this here blog whether or not she had seen The Legend of Lylah Clare. And she said no, and some of you (the Siren names no names, you know who you are) said “Oh Siren! You should see it!”


So some time later (seven years, but who’s counting) the Siren did sit down and watch Lylah, and now she is back to ask, WHY DID YOU DO THIS TO HER? 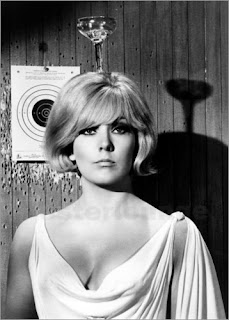 The Legend of Lylah Clare is terrible. The Siren issues that judgment after watching it on an impromptu double bill with Where Love Has Gone which is, god knows, also bad, but bad in a fun, watchable, even sociologically interesting way. Where Love Has Gone answers the intriguing question of how the Johnny Stompanato murder would have played out if, rather than a movie star, Lana Turner had been a wealthy abstract sculptor in San Francisco, and its good points include, but are not limited to, 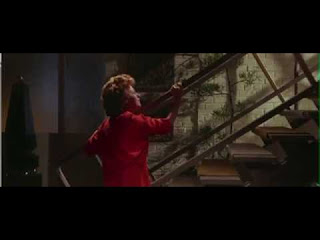 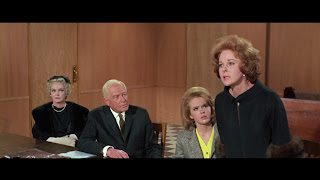 2. George Macready (second from left) classing up the joint as the family lawyer, as he nears the end of a long movie career spent giving nutcases unheeded advice in a mellifluous voice 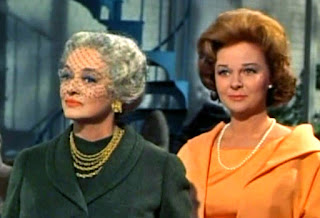 3. Bette Davis, in a gray wig, but made up nicely and wearing chic clothes, showing that she still looked good if you weren’t deliberately trying to make her look bad

4. An impressive assortment of 1964 furniture and costumes (by Edith Head) and hairstyles, all deployed to tell a story that begins during World War II

5. Newspaper headlines which are used to remind the audience that though the hair may shriek 1964, V-J Day was back in 1945

6. Joey Heatherton as a brunette, and she spends most of the movie making day-at-the-dentist faces like that 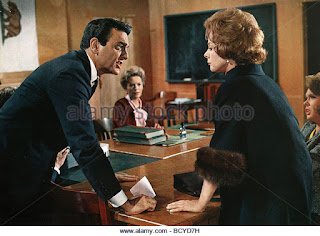 7. Jane Greer in her standout supporting turn as “Recognizable Human Being.” (That's her in the middle, Joey's baring her teeth again on the right.)

Plus, Mark Harris recommended Where Love Has Gone on Twitter, and he wouldn’t steer a Siren wrong. 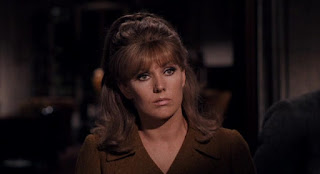 But...Lylah Clare. Jesus, what IS this movie? Many are the Robert Aldrich movies the Siren has seen and loved, but this one is no Autumn Leaves, hell, it’s not even Sodom and Gomorrah.


For one thing, Sodom and Gomorrah has a clear timeline. In Lylah Clare, the allegedly legendary title character was a German-born movie goddess who, while she was being chased by a lust-crazed fan who was threatening her with a knife, broke her neck in a fall off the building-code-violating banister-less side of the grand staircase of the home of the director she had married that day. (That’s the initial version discernible from one of many flashbacks, anyway.) Now, years later, Lylah's widower and director, Lewis Zarken (Peter Finch), is casting uncanny look-alike Elsa Brinkman (Kim Novak) in a Lylah Clare biopic, because Lewis wants a comeback, and everyone knows that biopics are the No. 1 fastest way to renewed artistic respect.


But: It’s apparently only 20 years, 25 max since Lylah met the mansion floor, and despite many flashbacks, this movie is set firmly in its late-1960s here-and-now. Not just the styles, but even the movie equipment, the cars, the TV sets, you name it. Yet in the slideshow of Lylah’s career that opens the movie, her “nude shot” echoes Marilyn Monroe’s last session with Bert Stern; Lylah’s wedding gown mimics bias-cut early ’30s; and the folks at Lylah’s funeral are wearing everything from a pillbox hat to a cloche. Later we also hear that Lylah slept with the Japanese gardener to console him on the eve of his being sent to an internment camp, which would make Lylah's neck still unbroken in 1942. Do you see that this math could give a person a migraine? Would you, like the Siren, spend much of the running time periodically yelling at the screen, “What the hell year is it?” 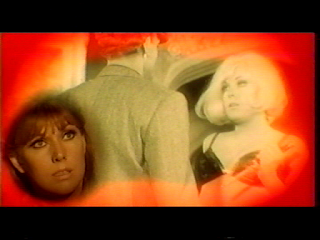 OK, given that the movie has a lot of other what-is-reality-anyway affectations, we’ll say it’s fine, and anyway, who doesn’t want to pretend that a few years here and there didn’t happen. That still leaves us with the script. Lylah Clare is supposed to be an excoriating look at the dream factory, well-trod territory for Aldrich (for the record, the Siren loves both The Big Knife and Whatever Happened to Baby Jane?). Somehow Aldrich got the idea that what we want here is to have all of the philosophizing and negotiating played in a nice stable medium shot so you can’t miss a word no matter how hard you try, even when Rosella Falk (as Lewis’s lesbian housekeeper, who once loved Lylah) is compressing her lips in a straight line and giving one of her heavily accented speeches about what rats they all are. And what we want from the numerous flashbacks to old Hollywood, and Lylah’s tragic accident, and Lylah’s insatiable sex life, is a bunch of wavery black-and-white floating dream-insets with distorted sound.

There’s no humor in this movie. How can you have a movie about Hollywood without a single laugh? The closest it comes is Peter Finch’s line, addressed to Elsa as she tries to descend the staircase in an elegant manner: “We’re moving like a deeply offended Tibetan yak!” Which doesn’t make any sense, it’s just a collection of words, with royal first-person plural and Peter Finch’s accent used to simulate wit. And without even the saving grace of being funny, Peter Finch’s character is a trial: nasty, conceited, physically abusive, and vulgar, not so much Von Sternberg or Stroheim (supposedly the basis for Lewis) but rather the kind of man they satirized. 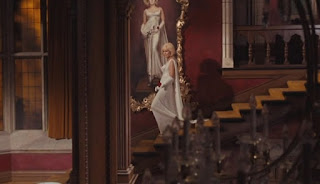 Ernest Borgnine is a one-note loudmouth, which, given that he is obviously playing Harry Cohn, lends a touch of historical accuracy, but gets old, fast. At least one of the screenwriters hated Hedda Hopper so much he invented a fictional leg amputation and prosthetic for the Hopper-based character, but even so, Hopper might have loved Coral Browne’s performance, especially because Browne makes her 10-minute scene one of only two good ones in the movie. The scene is a crowded cocktail-party-press-conference-star-unveiling sort of thing at Lewis’ mansion (where even the death of his wife still has not prompted Lewis to put a banister on the staircase). Browne’s gossip columnist pokes at Novak’s Elsa with her cane, and in a voice that would carry to the Old Vic balcony asks whether Elsa is sleeping with Lewis. And Elsa tells her off — in a heavily German-accented voice. Because Elsa is being possessed by Lylah.

The Siren has no problem with that plot development, matter of fact it was what drew her to the movie. But...when Elsa’s voice drops an octave and heads straight for Berlin, none of the hundreds of guests say anything about that. Look, if out of nowhere you suddenly start doing your Marlene Dietrich impression, people say something. The Siren tells you this from personal experience. 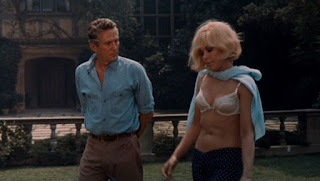 And then there’s the way this movie treats Kim Novak, how she spends one scene inexplicably walking around the garden in her brassiere like some kind of dope, gets stripped to her bra every damn time there is a flashback to her death scene, and is made to re-enact at least three or four cut-rate versions of her bell-tower fate in Vertigo. You don’t satirize Hollywood by exploiting an actress, much less by burlesquing an infinitely better film. Also: The nerve of writing Lylah so that only the most blockheaded viewer won’t think of Dietrich as well as Greta Garbo, both of whom were serious professional actresses before coming to Hollywood — then filling the script with references to how Lylah got her big break as the star attraction in a German brothel. Hey there, original authors Robert Thom and Edward DeBlasio and adaptation writers Hugo Butler and Jean Rouverol, who do you think you are? Furthermore, 1968 was a little late to still be doing the sad-nutty-lesbian-in-unrequited-love thing, although admittedly Aldrich did it a lot better that same year in The Killing of Sister George, which the Siren likes better than Lylah Clare. Pull an Aldrich movie out of a hat and you will find one that the Siren likes better than Lylah Clare.

Some people like the fadeout; it struck the Siren as the biggest, most annoying cheat since The Strange Love of Uncle Harry. For the record, the other good scene in the movie is an early one of Elsa walking down Hollywood Boulevard just before dawn, and she can see all the stars, some that she recognizes, some that she’s hardly even heard of. There’s even a marquee for The Dirty Dozen, Aldrich’s previous (and as you know, much better than Lylah Clare) movie.

Anyway, want to shut out the world with a fun bad movie? Where Love Has Gone. As for The Legend of Lylah Clare: Last year Kim Morgan asked Quentin Tarantino about it, and he responded, “Even I can’t get through that one, and I love Aldrich.”