2017: The Year in Old Movies (because measuring it in other ways wouldn't be nearly as pleasant)

The 10 best of what the Siren watched in 2017, presented without preamble, and in alphabetical order. The Siren wishes her patient readers a most happy 2018. 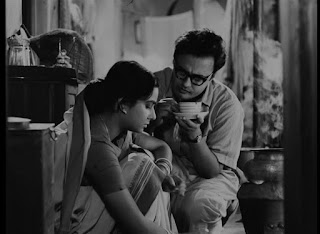 The Big City (Mahanagar; directed by Satyajit Ray, 1963. Viewed on Criterion DVD)
Madhabi Mukherjee’s performance instantly became an all-time favorite. It is part of Satyajit Ray’s genius that he refuses to make her husband (Anil Chatterjee, half lummox, half mensch) into a villain, instead showing how the man’s prejudices give way not only to love of his wife, but common sense. 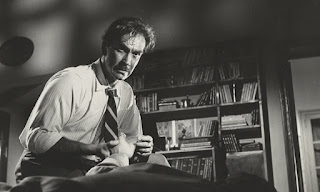 Bitter Stems (Los Tallos Amargos; directed by Fernando Ayala, 1956. Viewed at Metrograph)
The Siren thinks this may be the noirest noir of them all. The movie weaves together guilt and ambivalence over Argentina’s history in World War II with the hero’s (Carlos Cores) own psychological unraveling. Magnificent cinematography by the Chilean Ricardo Younis. Do read Raquel Stecher’s post on the film’s restoration; you will see how close we came to losing this beauty forever. The Siren was so impressed that she donated to the Film Noir Foundation as thanks. 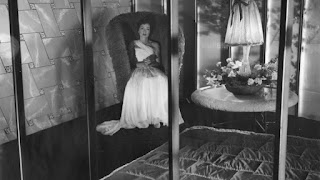 The Glass Tower (Der gläserne Turm, directed by Harald Braun, 1957. Viewed during Film Society of Lincoln Center’s series The Lost Years of German Cinema: 1949–1963.)
A classic women's picture about the emotional abuse inflicted on a former actress (Lilli Palmer) by a secretly psychotic tycoon husband (O.E. Hasse). You’d know this film influenced Rainer Werner Fassbinder even if the program notes never said so. The Siren loved the way it suddenly became almost an Agatha Christie mystery, loved the design (by Walter Haag) that envisions the couple’s life as a series of elegant glass-walled prison cells. The plot resembles Under Capricorn, but the film plays out to its resolution in a much more satisfying way. (Bosley Crowther’s review is possibly the most sexist thing he ever wrote, which is saying something.) 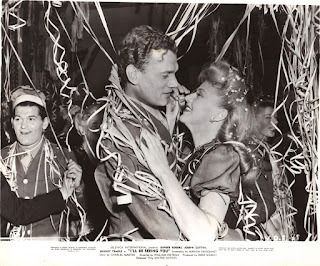 I’ll Be Seeing You (directed by William Dieterle, 1945. Viewed on Kino Classics DVD).
Somehow the Siren had missed this delicate wartime romance, which boasts one of Ginger Rogers’ most heartfelt and touching performances. As her character and that of Joseph Cotten gradually fall in love, you realize you are watching two psychically wounded people trying to heal. The Siren much prefers this to the better-known Love Letters (same year, same director), which has a torpid screenplay by Ayn Rand; I’ll Be Seeing You has a screenplay by Marion Parsonnet, whose credits include Gilda. The Siren saw I’ll Be Seeing You while researching her video essay on Ginger Rogers’ dramatic roles, which will be included in Arrow Films’ Blu-Ray release of Magnificent Doll in February 2018. 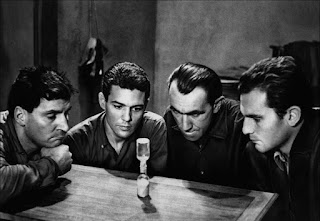 Le Trou (The Hole; directed by Jacques Becker, 1960. Viewed at Film Forum’s run of the 4K digital restoration.)
The Siren has a new favorite prison movie. And while this may surprise you, the Siren tends to like prison movies. The late-movie payoff is one that many Hollywood directors would sell a kidney to come up with. 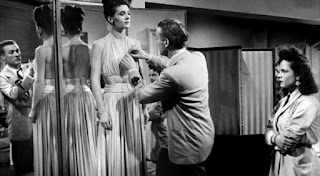 Paris Frills (Falbalas; directed by Jacques Becker, 1945. Viewed on MUBI.)
It’s a pity this isn’t widely available, as it makes a terrific companion piece to Paul Thomas Anderson’s Phantom Thread. The Siren would love to know if Anderson saw it. Paris Frills also concerns an egotistical couturier (Raymond Rouleau), whose atelier is also in a palatial townhouse, and who also runs roughshod over the people around him, with much different consequences. Becker is more concerned than PTA with the daily labor of “les petits mains” and with suggesting all the lives beyond those of his leads. The Siren’s favorite scene involved the couturier, deep in a selfish funk about a love affair, being told off by Solange (Gabrielle Dorziat), his equivalent of Phantom Thread’s Cyril: “I don’t give a damn about her. She has time for sentimental complications, where here there are 300 who can’t be permitted that, and who you are going to put out in the street.” (Note for the Siren’s fellow lovers of fashion history: The gowns were by Rochas.) 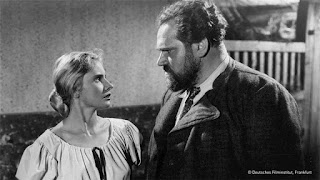 Roses Bloom on the Moorland (Rosen blühen auf dem Heidegrab; directed by Hans H. König, 1952. Viewed as part of the FSLC Lost Years series.)
The Siren’s surprise of the year. One alternate title is Rape on the Moorland, which didn’t exactly sound like her sort of thing, and she saw it only because it was screening at a rare moment that found her in the Walter Reade neighborhood. The film turned out to be a unique combination of Universal horror movie and rural romance, with Ruth Niehaus splendid as the death-haunted peasant heroine, and Hermann Schomberg storming through his scenes as the bestial villain. König makes exquisite use of the windswept, Bronte-esque setting, but what really sold the Siren was the denouement, with its unexpected warmth and humanity. 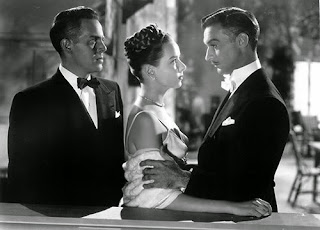 Ruthless (directed by Edgar G. Ulmer, 1948. Viewed as part of the MoMA series “Poverty Row.”)
Written about in the Siren’s roundup of this series at the Village Voice. 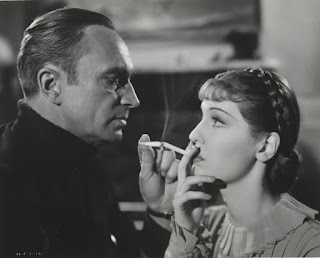 The Spy in Black (directed by Michael Powell, screenplay by Emeric Pressburger, 1939. Viewed on MUBI)
Yes yes, everybody else already got to this one; better late than never, my friends. Terrific-looking BFI restoration. Conrad Veidt has a great doomed romantic part even though he's nominally the villain. Excellent location work in the Orkneys. A coolly intriguing performance by Valerie Hobson, who ordinarily doesn’t excite the Siren. 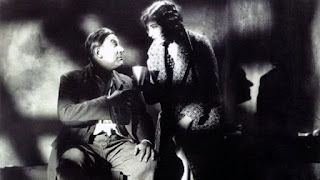 Tonka of the Gallows (Tonka Sibenice, directed by Karel Anton, 1930. Viewed as part of MoMA’s series “Ecstasy and Irony: Czech Cinema, 1927–1943.”)
The Siren wrote her heart out about this one at her Film Comment blog.

Honorable mention, among many others seen and enjoyed: 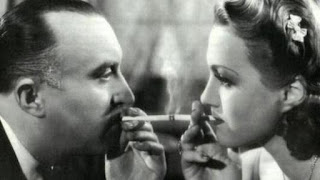 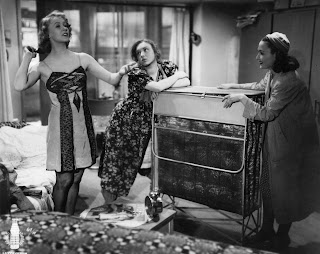 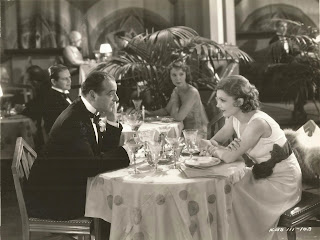 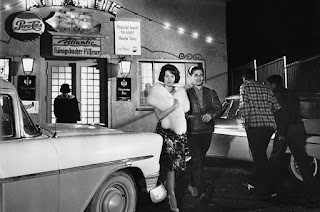 Black Gravel (Helmut Kautner, Germany, 1961. Note: This one is not for dog lovers.) 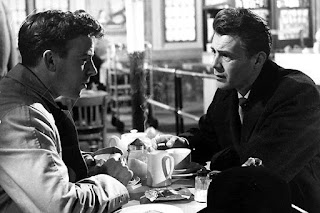 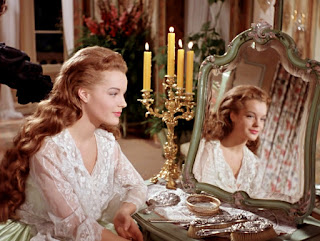 What follows is a roundup of some of the work that the Siren did elsewhere this year, aside from those already mentioned above.

Booklet essay for the Masters of Cinema Blu-Ray of Cover Girl (a stunning restoration, by the way).

Booklet essay for Criterion’s Blu-Ray of His Girl Friday.

Booklet essay for Criterion’s Blu-Ray of The Philadelphia Story.

For the Village Voice, a write-up of "Hank and Jim," a series at Film Forum linked to Scott Eyman’s wonderful book about the deep, lifelong friendship between Henry Fonda and James Stewart.

Also for the Voice, an essay about the William Wyler series that ran at the sparkling new Quad Cinema.

"What Makes Lubitsch Lubitsch?" at the Voice, a chance to ramble on about the master, via the Film Forum's near-complete retrospective.

For the San Francisco Silent Film Festival's program, I wrote an essay on The Doll, a 1919 silent from Lubitsch's Berlin period, starring the irrepressible Ossi Oswalda.

An essay on the magnificent Marseille Trilogy, again at the Voice.

With close personal friend Glenn Kenny, recorded the commentary track for Force of Evil, part of this four-film set from Arrow. (Out of stock, alas.)

For her blog at Film Comment, in addition to her essay on Tonka, the Siren wrote on
Michèle Morgan
Beat the Devil
The Stranger
The Last Man on Earth & It’s Great to Be Alive
The “Roman Hollywood” series at Film Forum; this blog post includes the Siren holding forth briefly on her love for Three Coins in the Fountain.

Thanks for this. Black and white lives. The Siren is indispensable.

Do not forget your wonderful contribution on Die Puppe and Ossi Oswalda for the SFSFF!

"Le Trou" is a great film, very meticulous in its execution as a film and as a prison break. Jacques Becker's work is very worth watching. I'd watch everything he directed. It's worth it.

Some of the "actors" in "Le Trou" were actually (former) criminals. Might be interesting sometime to look at how many actors were criminals. Michael Mann's "Crime Story" is the only production I know where both a former criminal and former cop were featured as actors, respectively, Dennis Farina and John Santucci.

Oh my goodness Rudyfan, you're right! I knew there was something I was forgetting. I shall amend.

I think the high point of my interview with Bertrand Tavernier for RogerEbert.com was him raving about the greatness for Jacques Becker for about 7 minutes. A very underrated director in America!

I just noticed that Falbalas/Paris Frills is available from the Internet Archive, at https://archive.org/details/Falbalas1945. The sound quality isn't great, but at least it's accessible for those interested, albeit without subtitles.

Your review of "The Philadelphia Story" is the only one I've ever read that doesn't think Tracy is too harsh on her father, and doesn't think she needs to be "humanized!" Hear, hear! I've found Seth Lord insufferable for half a century, since I first saw this movie in 1968, luckily, beautifully restored at the UCLA Pacific Film Archive. We used to be able to watch all the classics for free, and it was my first time to see them on the big screen, un-butchered and commercial-free. I've always been Team Tracy and I've lost count of the times I've defended her. Yes, the whole point of the story is to get Tracy and Dexter back together again, but divorcing him in the first place for a drinking problem wasn't a wholly unreasonable thing to do! (Maybe this reflects changing attitudes about alcoholism since 1940, I don't know.) Anyway, heated arguments can erupt when fans of "The Philadelphia Story" get to talking at length. Thank you, thank you for sparing us another take on the emotional journey of Tracy The Frigid Ice Maiden! Dexter does enough of that.