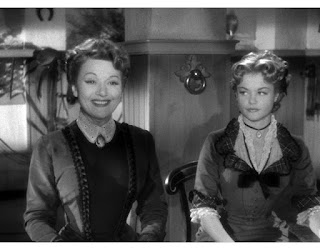 (Olivia is a co-release by Icarus Films and Distrib Films US. The film's glorious 4K restoration was done by Les Films de la Pleiade in collaboration with Les Films du Jeudi with the support of the CNC, and is having a run at the Quad Cinema in New York. There are plans for it to play other cities, and when it does, you most definitely should go.)

When Simone Simon made her Hollywood debut in 1936, it was in a 66-minute trifle called Girls’ Dormitory. Set in a German boarding school where the girls do their fencing and swimming in unnerving Leni Riefenstahl–style symmetrical rows, the story concerns how Simon (25, playing 19) falls in love with the Herr Direktor (Herbert Marshall, a handsome but obvious 46) and, eventually, gets her (old) man, even though lovelorn age-appropriate Ruth Chatterton is right there, pining away. It’s a pretty terrible movie, leaden of pace and wooden of dialogue, with countless discombobulating close-ups of Simon, then getting the star buildup from 20th-Century Fox.

But, at least for the Siren, the contrast with Girls’ Dormitory gave an added frisson to Olivia, a beautiful movie made 15 years later in France by the director Jacqueline Audry. Simon plays Miss Cara, co-headmistress (her exact title is a bit fuzzy) of a luxe girls’ boarding school, in neurasthenic love with her partner Miss Julie (Edwige Feuillère), and pitting infatuated students one against another due to her suspicions that Miss Julie is seducing certain favorites. Far more headily romantic and sensual than Girls’ Dormitory, Olivia is a film where the clasp of a hand or a brush of the cheek stands in for all sorts of possibilities. But alas, there can be no permanent togetherness like that granted to Herr Direktor and his teenage fan. 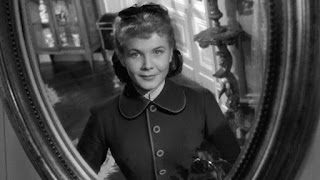 The title character (Marie-Claire Olivia, a stage name she adopted for this movie) is around 16 or 17, the latest pupil at the girls’ school run by Miss Julie and Miss Cara. Imperious Miss Julie is devoted to the arts in such an evangelical way that she reminded the Siren of an apolitical Miss Jean Brodie, though that famed Scottish teacher wouldn’t come along for another decade. Miss Cara, on the other hand, is devoted to passive-aggression, wielding migraines, insomnia, and vague aches from the chaise longue in her room.

Despite the querulous presence of Miss Cara, at first this seems simply like the greatest boarding school of all time, an all-female paradise. Virtually no men intrude, and when they do, they are usually filmed from the back; they have no power here. The food is, in defiance of expectations, delicious, prepared by Victoire (a hilarious Yvonne de Bray) to adhere to Miss Julie’s expectation that her girls will develop a refined palate to go with their other cultivated tastes. The classroom is a two-story library with perfectly matched volumes and a vast, welcoming round table. The math teacher (Suzanne Dehelly) admits she doesn’t like math and bluntly tells the girls that cube roots have nothing to do with life. The school itself is an exquisite mansion in the French countryside, with a big swoop of a staircase and a huge individual room for each resident. It’s all decorated in the most deliciously feminine Belle Époque style, with graceful furniture and mounds of velvet hangings, tassels, and lace. (The production designer was Jean d’Eaubonne, who worked for Max Ophuls on similarly set films such as as Le Plaisir.) Oh, and the gardens, the manicured gardens, begging you to romp, or sip tea, or sit on the grass with a book. Even the countryside beckons. One of the students squeals to Olivia, “Let’s go run in the forest” and the Siren nearly found herself responding out loud, “Yes, LET’S!” 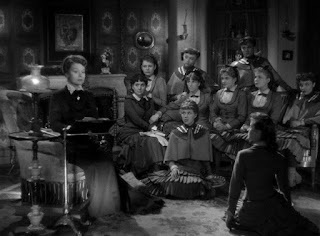 But in a school movie, the arrival of a new student always sets off reverberations. Olivia is invited to visit Miss Cara’s boudoir, where the girl observes how to keep a paisley shawl on the lady’s feet and apply a hot cologne pad (a what? that’s a new one on the Siren) to Miss Cara’s aching brow. And it seems that Olivia is destined to be a “Carista”—arrayed on Miss Cara’s side of this peculiar, not at all cold war. But when Miss Julie conducts a fireside reading of Racine’s Andromaque for a group of enthralled pupils, her command of poetry causes Olivia to fall in love with her in the space of a couple of hours, and thus does Olivia become a “Julist.” (The Brodie set! Did Maggie Smith see this movie?)

Feuillère was, wrote David Shipman, “a pupil of a pupil of Sarah Bernhardt,” her training thus as purely classical as you could get. She was once a member of the Comédie-Française, but soon left because she disliked the quality of the roles she was offered. And like co-star Simone Simon, Feuillère’s personal life was mysterious and not for public consumption; her sole youthful marriage ended after only a couple of years due to (depending on your source) his drug use or simple incompatibility, although it was his name that she adopted for the stage. “Her voice,” wrote the Independent, “which no one who heard it could ever forget, was powerful, vibrant, controlled and perfectly modulated.” She was famous also for her beauty, which age diminished scarcely at all. So Feuillère is perfect for the part of Mlle. Julie, the magnetic headmistress who reads Racine and Corneille, Victor Hugo and Aeschuylus, to an audience of enthralled teenage girls. 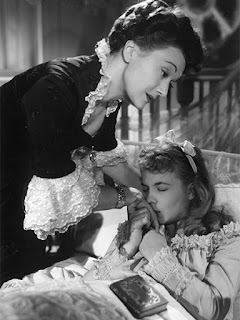 Under its hothouse trappings, Audry’s film is serious about what it means for a pupil to fall in love with her teacher, and the overtones of predation should the teacher return that love. Thus Feuillère plays Julie at a constant slow-boil. Even a glance from those magnificent eyes is felt by her girls in their very bones. She seems barely able to help herself with all this temptation around; at a masqued Christmas ball, the headmistress briefly fastens her mouth on the neck of a beautiful student in an astonishing gesture of vampiric sensuality. Yet more than once Miss Julie indicates that she knows the consequences of acting on her desires with girls too young for a sexual affair, and in particular, she fears the results for Olivia. Bright and pretty, but not too much of either, Olivia is not a standout in any way, and Julie tells her this. But they both know that Olivia’s queer desires will always set her apart, as they do Miss Julie.

The movie leaves many questions deliciously unanswered. Where the heck are the younger students during the day? Who dusts all those velvet hangings and lace curtains? Is Miss Cara having affairs with her students, or do they simply apply hot cologne pads to her forehead and tiptoe out? What kind of hold does the sinister German teacher Frau Riesener have on Miss Cara? Who is the human agent of Miss Cara’s ultimate fate? What’s the story with the girlish, brokenhearted Italian teacher? The only character whose heart seems entirely open to the audience is Olivia, a teenager slowly realizing her attraction to women. 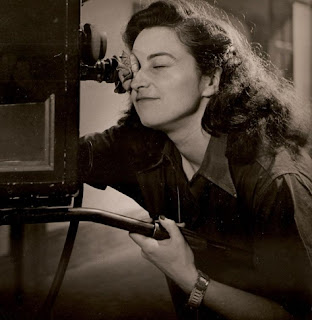 Audry's direction is as elegant as the surroundings; she loves fluid camera movement and graceful overhead shots. To watch Olivia is to feel a simmering resentment that you (probably) haven’t seen other films by Jacqueline Audry, which is no doubt the impetus behind this restoration. Audry was born in 1908, and it took her 15 years of working as an assistant to the likes of G.W. Pabst, Jean Delannoy, and Max Ophuls before she got to make her first film, Les Malheurs de Sophie in 1946. (Wikipedia suggests this is a lost film, due largely to its censorship problems, but the Siren has been unable to confirm that.) The Battle of the Sexes in French Cinema, 1930–1956 by Noël Burch and Geneviève Sellier offers an overview of some of Audry’s films, as well as an explanation (other than the influence of former boss Ophuls, the reason most critics proffer) of why she primarily made costume films:

With her husband, Pierre Laroche, [after her first film] Jacqueline Audry then adapted three novels by Colette for the screen [Gigi (1948); Minne, l’ingénue libertine (Minne, 1950); Mitsou (1956)] as well as Victor Marguerite’s La Garçonne. From the start, then, she was a feminist filmmaker in that all her movies directly challenge sexual roles as defined by society. But she resorts to the smokescreen of the costume film, and it can be argued that the success of many of her films was the result of a misunderstanding fostered by a lightheartedly erotic atmosphere that made it possible for her to criticize gender relations without clashing openly with the general climate of male chauvinism.


Olivia was given the ugly title The Pit of Loneliness when it was released three years later in the States, in an obvious attempt to evoke memories of Radclyffe Hall’s notorious The Well of Loneliness. But it’s based on Dorothy Bussy's English-language novel, which was published under a pseudonym in 1950. Michael Koresky points out that Bussy’s “queer bona fides are rather remarkable: the bisexual Bussy’s younger brother was Lytton Strachey, renowned gay writer and critic; she was involved in an affair with renowned arts patron Lady Ottoline Morrell; and was friends with André Gide and E. M. Forster.” Audry liked to work with people close to her. Sister Colette Audry did the adaptation for Olivia (thus ensuring it would sometimes be identified as another work by THE Colette); and husband LaRoche, who co-wrote Les Visiteurs du Soir for Marcel Carné and Lumière d’été for Jean Grémillon, wrote the dialogue.

Olivia “was considered as a plea for sanity” on its subject, wrote Shipman. But Burch and Sellier say that “it was after she made Olivia that some critics expressed more aggressive hostility to Audry, as though she had broken a taboo that no longer allowed her movies to be classified merely as enjoyable entertainment.” Audry died in an automobile accident in 1977; her last film, which starred Emmanuelle Riva, was Bitter Fruit in 1967. In addition to the obstacles she faced as a woman director, her low profile among cinephiles has also obviously been affected, like many others, by the Nouvelle Vague’s imprecations against “the cinema of quality.” But let’s consider a thumbnail sketch of Minne: the story of a woman unable to find sexual pleasure because she finds that men are concerned only with their own.

Be honest with the Siren: Aren’t you dying to see it?