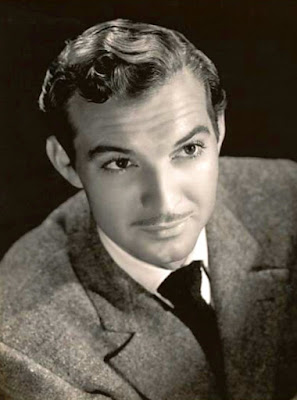 The Noir City E-Mag No. 30, Spring 2020, has sprung, and the Siren has a piece in it, about the career of the genre’s quintessential playboy heel, Zachary Scott. Naturally the Siren focused on his work in what Scott would have called “melodramas” or “crime pictures,” from his brilliant debut as the depraved title character of The Mask of Dimitrios, to his scheming gamekeeper in the not-noir-but-close-enough The Young One, directed by Luis  Buñuel. The article has had a long and somewhat circuitous route to publication (through no fault of Noir City, and that's all the Siren will say about that) and reflects a great deal of time spent watching Zachary Scott films and reading about Zachary Scott and thinking deep thoughts about Zachary Scott’s acting. Here, for example, is a newspaper article that turned up in the Siren’s research; alas, she couldn’t wedge it in, given that her Scott saga was already running over length. It’s from the Honolulu Advertiser of July 12, 1951. 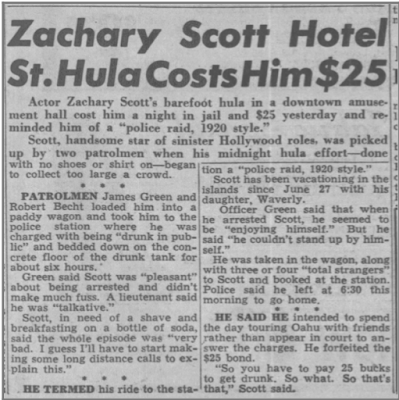 The real discovery of this period of research was Guilty Bystander from 1949. Made during what was unquestionably the worst year Scott ever had, the movie has many uncomfortable parallels with what was going on in his life, and he gives one of his finest performances. The Siren watched Guilty Bystander in a public-domain print that appeared to have been run through a Maytag rinse cycle a few times shortly after serving as a drawer liner, but there is no need for her patient readers to experience it the same way anymore. It’s been restored via the offices of Nicolas Refn, and the restoration was recently screened on MUBI.com and will doubtless turn up elsewhere soon. For the record, the Siren also got a kick out of Flaxy Martin, wherein Virginia Mayo's title character makes a sap out of Scott in a big way. 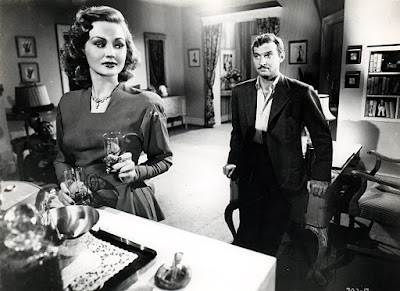 The Siren advises her readers to subscribe, which they can do here for a small $20 fee that will go to the restoration work of the Film Noir Foundation. Should they do so, they'll get a wonderful array of top-notch work, including articles by Nora Fiore, and Chelsey Minnis, as well as the Siren's old friend Imogen Sara Smith. Imogen has a long and deeply researched biographical article about the life of the writer and director José Giovanni, who she calls “one of the most fascinating figures in French cinema” and “the source for three indisputable masterpieces, Le Trou (The Hole, 1960), Classe tous risques (The Big Risk, 1960), and Le deuxième souffle (Second Wind, 1966).”

“But,” writes Imogen, “as noir teaches, the past never stays buried.” Giovanni had a criminal past he'd used to buff his underworld cred, while remaining notably cagey about the details. Almost 30 years ago it was revealed that this murky background in fact camouflaged a record of collaboration with the Nazis, kidnapping, extortion, and murder for profit. Imogen tells the whole story, culled largely from French-language sources that have been hard to access, and plunges into the question of how the writer’s real nature may affect our perception of his work (and those who worked with him). It is, as the Siren told a friend, major. 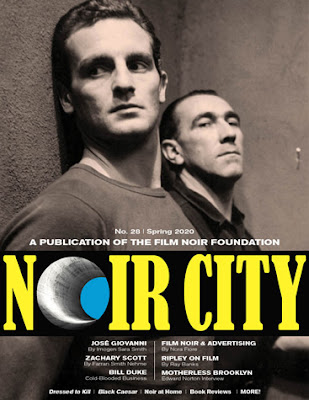 In the meantime, while Noir City remains available only to paid subscribers, the Siren here offers an excerpt, with the kind permission of publisher (and TCM Noir Alley host) Eddie Muller. 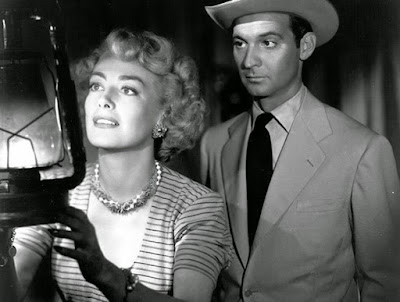 ...Flamingo Road (1949), which re-teamed Scott with Crawford and Curtiz, his key collaborators from Mildred Pierce, was better news in every way. The budget was decent; Robert Wilder’s screenplay of his own hothouse novel offered some big scenes for Scott’s character; and in the cast and ready to consume the scenery for lunch was Scott’s old friend Sydney Greenstreet. Crawford plays Lane Bellamy, a carnival dancer who washes up in a corrupt Florida town and proceeds to upend the local establishment. Fielding Carlisle (Scott, graced with another snooty handle) falls in love with Lane, but must marry a vacuous local deb in order to preserve his hopes of becoming governor. “All the characters are either crooked, engaged in adultery or illicit sex, as well as in criminal attempts to frame one another,” read the Breen Office’s accurate and delightful plot summary. Naturally the studio had to clean it up a bit, but enough sleaze survived to make Flamingo Road one of Scott’s most beloved films as well as a personal favorite of melodrama maestro Rainer Werner Fassbinder. What’s more, Flamingo Road was a hit.

Maybe Scott saw brighter horizons for 1949. If so, he was gravely mistaken. He was about to have the worst year of his life. It started out well enough in the spring, with Scott going to Film Classics to make Guilty Bystander, his fourth and best film with Faye Emerson. For once he was free of the threadbare-socialite routine. Scott is Max Thursday, an alcoholic ex-cop whose wife has left him and taken their son. Life has spiraled down to a gig as the house detective in a flophouse run by Smitty (Mary Boland, splendid in her final film role). Emerson plays ex-wife Georgia, who turns to Max in desperation when their son goes missing. Depression and drink were two things Scott knew well, and he throws himself into every sordid scene of self-pity and lashing out. Made just as Hollywood was discovering alcohol addiction as opposed to well-lubricated good times, Guilty Bystander knows going on the wagon is agony for Max even if he fears for his son’s life. The diamond-smuggling plot device gets tortuous, but Max’s struggle never feels phony. His major scene with Smitty, which should not be spoiled, is a marvel of high-tension reveals. (One reason Guilty Bystander doesn’t have a better reputation is that it’s been circulating for years in appalling video versions. Director Nicolas Winding Refn, a fan of the film, has financed a digital restoration to be offered free via his website, byNWR.com.) 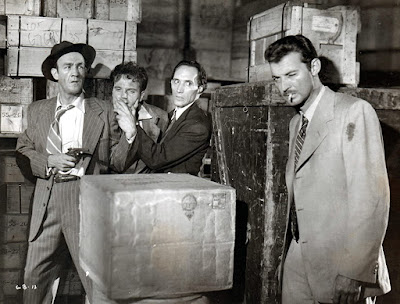 It was a terrific performance. But in a very noir twist, while Scott was on location, his wife, Elaine, was falling in love with John Steinbeck. The two met while they were both houseguests of Ann Sothern. By the time Guilty Bystander wrapped and Scott had rented a house in Malibu for the family, Elaine announced that she was leaving him for the Grapes of Wrath guy. Years later, daughter Waverly recalled to biographer Davis that when the bombshell was dropped, Scott stood in their living room yelling “John Steinbeck?!!?” in disbelief. The denial phase lasted a while, until Elaine filed for divorce in November.

Days later, Scott went rafting on a rubber boat off Topanga Canyon with his good friend, actor John Emery. A riptide capsized the craft, Scott hit his head on a rock, and Emery had to swim for shore with his unconscious friend in tow. The injuries kept Scott in the hospital for days, and the recuperation period was long enough to add to Jack Warner’s displeasure with his recalcitrant contract player.

Scott’s prospects grew dimmer. He had run the gamut of ways to piss off the studio brass. He borrowed against his salary, asked for loan-outs, pestered them to change the type of roles he was offered. Elaine had charged “mental cruelty” when asking for a divorce, and the filing included embarrassing revelations such as the dinner party where Scott threw an ashtray at a wall. And there were the absences: a “cold” here, a “bump on the head” there, “exhaustion,” a plain old no-show. Give or take a few accurate excuses, Jack Warner knew exactly what this spelled: Scott drank, and it was getting worse.

(Note: The banner still is from Danger Signal, which is discussed in the full article. The Siren couldn't resist the Chablis and the Scott side-eye.)
Posted by The Siren at 2:26 PM 5 comments: