Virginia Grey: Everything But Luck 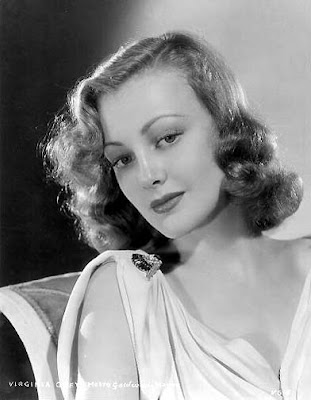 The Siren has another article up at Noir City e-magazine, the publication of the Film Noir Foundation. For putting your name on the mailing list, and contributing $20 (which goes to the Foundation's film preservation activities), you will get a subscription to Noir City.
This time the Siren is fulfilling a long-held ambition to write something about Virginia Grey, the striking, slender and versatile actress who graced almost 100 movies over the course of a career that lasted from 1927, when she played Little Eva in a silent version of Uncle Tom's Cabin, to her retirement in 1975. MGM colleague Ann Rutherford recalled, after Grey died in 2004, "The camera adored her. There was not a bad angle to her face." She added that Grey "could play the girl next door or somebody's other woman. And that was what kept her working." It was also what made Virginia fascinating to the Siren; that, as well as how good Grey could be if you gave her a good part. We'll start the excerpt with one film that everyone remembers.
* * * * *
Perhaps Grey’s most famous scene was a short one in The Women, the 1939 MGM masterpiece directed by George Cukor. She plays Pat, the saleswoman swooping around Joan Crawford’s Crystal Allen like a chic mosquito; as Crystal weepily refers to a sister’s illness, Pat asks, “What's wrong with her? She got a hangover?” The Women is a social comedy, but the Pat character’s cynicism would fit just fine in a film noir. In a vast cast of female stars (“everybody but Lassie,” cracked Rosalind Russell), critics singled Grey out. Yet even The Women didn’t do the trick for her at MGM. The studio cut her loose in 1942.
A gorgeous blonde in Hollywood will always have beaus, and Clark Gable became by far her most serious love. They met while he was in the process of divorcing his wife Rhea Langham. While she waited, ready to marry him the moment he asked, Virginia gave him a dachshund. But he didn’t ask. He married Carole Lombard instead. By all reports, Grey never got over it. Historian Robert Matzen, who wrote the book Fireball about the 1942 crash that killed Carole Lombard, said that a year or so after the tragedy, Gable “went back where he could be adored as needed.” Once again, though, it didn’t last; in 1949 Gable abruptly married Lady Sylvia Ashley. Though she had a relationship with Robert Taylor and also became close to George Raft, Grey never married. In a 2003 interview, all Grey would say about her feelings for Gable was “I adored him. I always will.”
She had talent, she had versatility, she had exquisite looks and a congenial nature. Virtually everyone in Hollywood liked Virginia Grey, says Matzen, including her supposed rival Carole Lombard. “Virginia,” Louis B. Mayer once told her, “you have everything but luck.”
And so the world of freelance acting seemed to offer her much the same as she’d gotten on contract: supporting work in big films, occasional leads in the smaller ones. Maybe being a perpetual also-ran was why some of Grey’s most highly individual and memorable performances came in movies like Accused of Murder (1956) and The Threat (1949). Film noir makes up a relatively small part of her filmography — she made at least as many westerns, for example — but in those noirs, she breathed striking life into her messed-up, misguided, in some cases blatantly foolish characters. Watching these movies, you feel instinctively that Grey understood what it means to be stuck in a rut, and even more so did she understand how it feels to love and not be loved back. She knew what it was like to have the goods and still get cheated.
For Universal in 1946 Grey was billed just below Kent Taylor for a 64-minute Universal Pictures B called Smooth as Silk, directed by Charles Barton. Grey plays actress Paula Marlowe, who’s stuck in supporting parts and is willing to lie, cheat, and steal her way to stardom. Whether or not frustrated ambition was Grey’s own predicament, she’s deliciously ruthless here, like Eve Harrington — only more obvious. Told she’s not getting the lead role she expected, Grey emits a “What?” that sounds like the bark of a seal, turning a monosyllable into a great line.
One of the most violent noirs Grey ever made was 1949’s The Threat, its genre credentials anchored by the incontestably tough Charles McGraw. The film shows that if the milieu moved downmarket, Grey was more than up to the challenge. Directed at RKO by Felix Feist, it’s a kidnapping saga with McGraw as a murderer named Kluger who’s on the lam from Folsom Prison, and has taken Michael O’Shea’s cop and Frank Conroy’s district attorney as hostages. Also unwillingly along for the ride is Carol (Grey), a nightclub singer and Kluger’s former moll, one he believes ratted him out. Carol spends much of her time trying to persuade him not to kill her and getting brutally knocked around for her pains. The movie was made soon after Gable’s marriage to Ashley, and Grey’s physical state is impossible to ignore. Always elegantly slender, here she is alarmingly thin, almost translucent; you feel that McGraw could pick any bone at will and snap it. Yet survive Carol somehow does, on a mixture of talk and shrewd psychological manipulation. For a fan of Virginia Grey, Carol’s arc is uniquely satisfying.
* * * * *
In the full Noir City article, the Siren also discusses Accused of Murder, from whence comes the banner; Highway 301, with noir icon Steve Cochran; Crime of Passion, with Barbara Stanwyck; Sam Fuller's brilliant, bonkers The Naked Kiss; and even a few outliers like Jeanne Eagels. So please do consider throwing $20 in the hat and subscribing. It's a great periodical and the Siren is proud to be in it.
Posted by The Siren at 8:41 AM