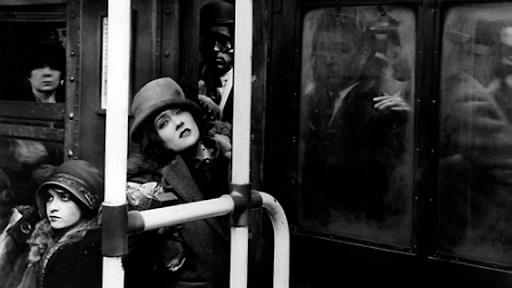 Wednesday, Sept. 29, 2021, is National Silent Movie Day. New York City's beloved Film Forum is celebrating with a screening of Allan Dwan's 1924 silent Manhandled, starring the fabulous Gloria Swanson. Some years back, the Siren wrote an appreciation of this film for a dossier on Allan Dwan, and she reprints the essay here. Those in the New York area who want to celebrate in person can go to the Film Forum screening at 6:40 pm, with live piano accompaniment by Steve Sterner.

*****
The Hays Code, the how-to guide for Hollywood morality, was already in place in 1924 when Paramount was deciding on a follow-up to Zaza for Gloria Swanson and her new favorite director, Allan Dwan. One enterprising promotional executive who was using the Code for what it was actually good for—pointers on what might titillate an audience into attendance—found that the act of "manhandling" was forbidden. The executive noted, however, that there was no injunction against titling something "Manhandled."
According to Swanson in her autobiography, Dwan asked Frank Tuttle for a story that could live up to the title. Tuttle suggested they flesh out a short story about a gum-snapping salesgirl whose good looks cause a series of rich bounders to lure her with promised riches, even as she tries to stay true to her poor-but-loving inventor boyfriend. Swanson, who was looking for things that would take her away from her couture-draped suffering image, agreed.
And so the movie begins with Swanson getting manhandled in a big way by that mauler supreme, the New York City subway system. Before she descends into the maw, Swanson's salesgirl, Tessie, gets splashed by passing cars, but that's only the prologue. Swanson was one of Hollywood’s most petite stars in history: 4 feet 11 inches. Many of her other movies use tricks to de-emphasize this, but Dwan seems to relish Swanson's shortness. Once Tessie is shoved onto the subway car by a uniformed platform worker (New York rush hour could still use this job) she's stuck between two men at an eye level just below their armpits.
Swaying with them against her will, Tessie does the dance of the New Yorker trying to avoid too much body contact, no matter how cramped the quarters. She drops her purse, and the men who bookend her stoop to help retrieve its contents. But when they reach back up for the straps, she's still got her arms looped through theirs, and for a moment Tessie is suspended in air. Once she's back on her feet and smacking away at her gum, the movement of the car and the crowd dislodges Tessie's impossible hat, an overlarge squashy cloche adorned with what look like marbles (although they're probably supposed to be grapes) swinging from one side like the tassel on a fez. The hat falls to the ground, she does a deep-knee bend to retrieve it, and when she finally comes back up, the hat has lost its grapes.
And, for a marvelously subtle half-minute, the mood shifts. Tessie's face crumples as she looks at her hat, bereft of its ridiculous ornament. You know instantly that the fruit was her favorite part, probably the reason she bought the hat, just as surely as you know that she can't afford to replace it.
Then her face regains its old hardness, she pulls the denuded hat back over her hopelessly mussed bob, and the hellish ride continues, complete with a masher all but licking his lips at her from his seat. When she tries to get off at her station, Dwan switches to an overhead shot. Perched in the rafters, we watch poor tiny Tessie try to disembark and get pushed back into the car, over and over. She can't manage to leave walking upright; she eventually has to bend over and scurry under a railing. Small as Tessie is, the subway, meaning of course New York itself, has all but brought her to her knees.
Dwan made six films with Swanson. "I like them all," he told Peter Bogdanovich. "But I think I might have liked Manhandled best for some reason—I can't remember why." Watching the subway sequence will certainly make it clear for anyone else. It's perfect—as a record of New York subways at rush hour in the 1920s, as a monument to Swanson's flair for slapstick, as a remarkably explicit commentary on the roughness, indifference and humiliations a woman may encounter from men any day of her life.
Dwan is famous for the widely varying nature of his movies. He did Westerns, noirs, comedies, adventures, historicals. Manhandled is a romantic comedy—the drama over Tessie's honor is largely sidelined—but more than anything, it's a star vehicle. They got along, Swanson and Dwan; she said that even at their first dinner meeting, she saw he was a genius. Still, Dwan must have known his main job on this film was to get one of the biggest movie names in the world square in the frame and looking good. He knew precisely how to handle Swanson's comic presence and timing, which were delicious. And Swanson was a beauty and a clotheshorse, with a keen sense of how to make herself look luscious on screen, and Dwan knew exactly how to use that and keep it comic, too. 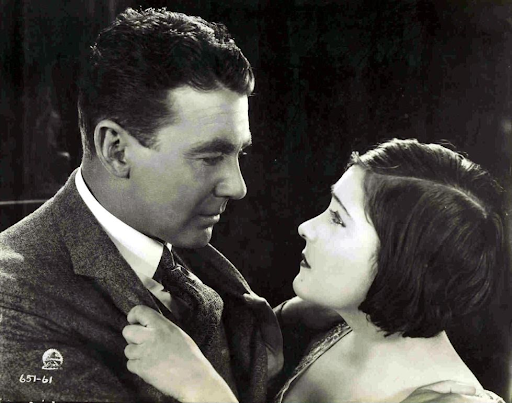 Swanson seems to be in every shot, although it's probably more like 3/4. Dwan has a consistent pattern for how he shoots Swanson. In a funny moment, the actress is usually full-face or three-quarters to the camera; even the broad way she moves her mouth when she's talking suggests a patented Noo Yawk honk. You often have the fun of discovering her most humorous bits at the edge of the frame, like Tessie's little hand gesture when stowing her chewing gum under a dressing table at a posh apartment.
When it's an emotional moment—she's with Tom Moore as her boyfriend, or pondering her love for him—Dwan usually shoots his star in profile. Swanson had a tricky profile; "ski-slope," they said, when she was starting out. As filmed by Dwan, it's always ravishing. A profile shot half-obscures Swanson's most celebrated asset, her eyes. Instead Dwan focuses on the purity of the skin, the curve of the cheekbones as, at the end of the movie, Tessie begs her angry man to say he still loves her.
Almost as wonderful as the subway scenes are the shots of Tessie at the window of her boardinghouse room. She loves her inventor, but she's afraid of marriage. She looks out the window at the airshaft, and Dwan films her almost with her back to the camera, her face reflected in the glass. Another overhead shot shows a woman (possibly pregnant) washing dishes at the sink; another woman is walking a crying baby while her stocky, shirtless and exhausted husband sprawls in a chair. That's early in the film; it's recreated at the end, when Tessie thinks she's lost Jim for good. It's night and it's harder to see her expression reflected in the glass, but the view out the window has changed: The maybe-pregnant woman is being embraced by her husband; the mother and father are in a chair, playing with their baby while their other children sleep in a shabby bed nearby.
These are the things that give texture and poignance to the comedy. In 1924, it was a given that sentiment embellished a film, not diminished it. But Manhandled is, above all, a very funny movie. Dwan pulls in a little closer for a view of Tessie, on a sales floor that's almost as crowded as the subway, impatiently blowing off the supervisor who's giving her a lengthy summary of what she's doing wrong. The supervisor is almost completely turned away from the camera; Tessie is being oppressed by a bald spot and a chin. 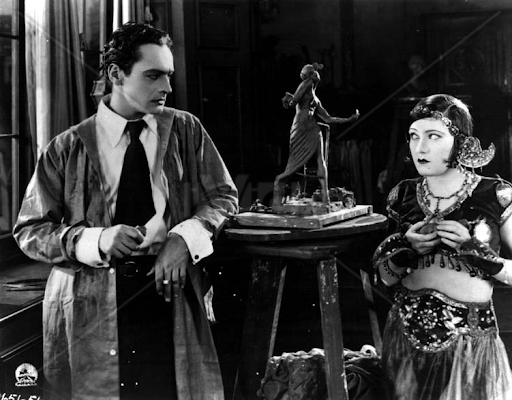 Later, Tessie will briefly become a sculptor's model, until, with burning eyes and flaring nostrils, the artist (Ian Keith) suddenly goes after her like she's Agnes Ayres in The Sheik. An impression that Tessie does of a Russian countess at a party gains her a job doing the same thing for Frank Morgan's oily couturier. One of the funniest things in the movie occurs when an actual Russian accosts Tessie at the atelier and speaks to her in the mother tongue. Swanson panics for an instant, then dissolves into tears. Dwan shoots his star's entire body as she droops across her interrogator, too moved by the evocation of her supposed homeland to speak.
Almost as brilliant is Dwan's handling of a potentially not-funny scene where Tessie is in a limo. We see only the driver and Tessie, richly gowned in the back, looking bored as hell and apprehensive, too. The head of the rich kid she's stuck with lurches into the frame beside her, as we suddenly understand her mood. After an exchange of words in the back seat, Dwan cuts back to the shot of the driver and Tessie, the rich kid intrudes into the frame again, and she slams out of the car.
Swanson had great natural comedic talent, but many years before the Method became common currency, Dwan wanted his privileged star to have a taste of the real in her performance. He told Bogdanovich that he made Swanson ride the Times Square–Grand Central shuttle at rush hour, resulting in the Manhattan hordes tearing glamorous Gloria's clothes and almost her body, too. (He said she spent many years trying to get even with him via various practical jokes.)
Dwan also urged her to spend a couple of days in disguise working at a department store, because she'd never been near a bargain counter even as a customer. Swanson powdered over her world-famous beauty mark, put on a blonde wig and stuck cotton in her nose. The result, she said, was that she talked "like a duck." She managed the deception for about a day and a half before being found out. But in both cases, when the time came to film, Dwan said Swanson told him, "Don't tell me—I know what it's like." 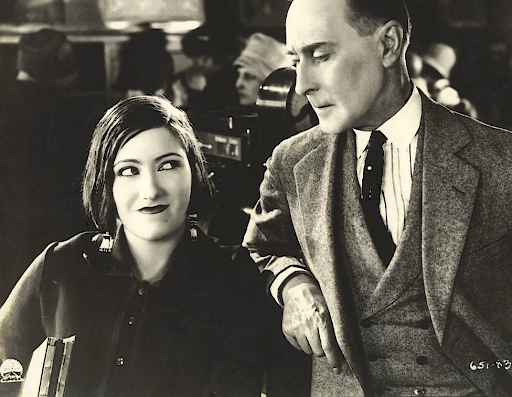 "We practically had no scripts," he told Bogdanovich, "we used to manufacture things as we went." Swanson agreed; "Allan used a script like a blueprint," she said. "The best things we made up as we went along." When she was making Zaza, Swanson said she understood that "I had been getting stale in Hollywood, and I hadn't realized it." Allan Dwan made her fresh, and she was never fresher than in Manhandled.
Posted by The Siren at 8:09 PM No comments: